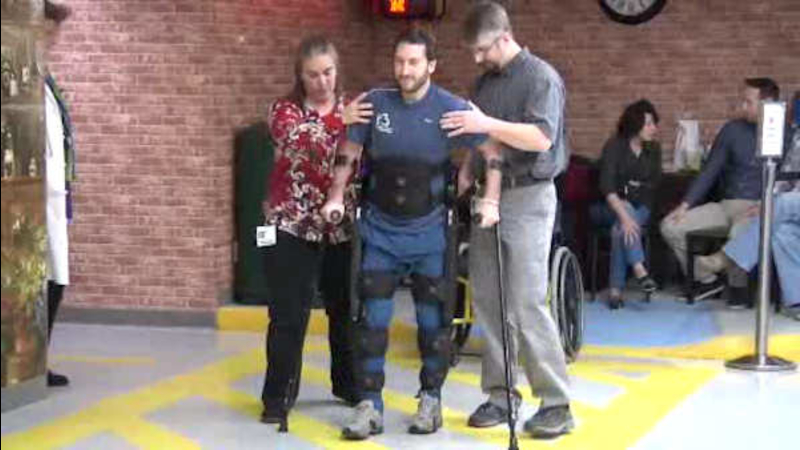 PORT JEFFERSON, Long Island (WABC) -- Thirty-one-year-old Greg Durso usually needs a wheelchair to get around, but on Tuesday, the Connecticut man used cutting-edge technology to help him stand and walk at a facility on Long Island.

You may have heard of robotic suits before, but this one is just the second to be approved by the FDA. And now, it's being put to work right here in our area.

Durso was paralyzed in a sledding accident eight years ago, but thanks to new technology, he can rise out of his wheelchair with some help and walk across the room.

"When you see this, I actually get up, I actually walk," he said. "I gave my sister a hug for the first time in eight years, face to face. It's pretty emotional and empowering, and it's just exciting to see where the future is really going to go with this type of technology."

It's an exoskeleton made by Indego, and Durso is participating at a clinical trial at St. Charles Hospital of Long Island in Port Jefferson. It's one of only nine facilities in the country to have one, and weighing in at 26 pounds, this one in particular is much lighter than the other approved version.

"While right now the device moves the legs for the patient, what will be in the next version of this device is electrical simulation built in," St. Charles medical director of rehabilitation Dr. Jennifer Semel said. "So that those patients, their own muscles will be able drive the machinery."

Even though Durso has no use of his legs, he still wakeboards and skis. And staying in shape helped him qualify for the trial, which leaves him feeling hopeful and empowered.

"I feel like a giant, even though I'm far from that," he said. "It's just an incredible feeling to be up there and walking again and putting weight on your legs. Each step is kind of like a leap of faith. You put yourself out there, and I think it's like that in life as well."

Dr. Semel said the hospital had been interested in working with Indego for some time, and she is optimistic for the future as well.

"We will be, in the next few weeks, starting with stroke patients, right now with spinal cord injury patients," she said. "But the future of this is really limitless."