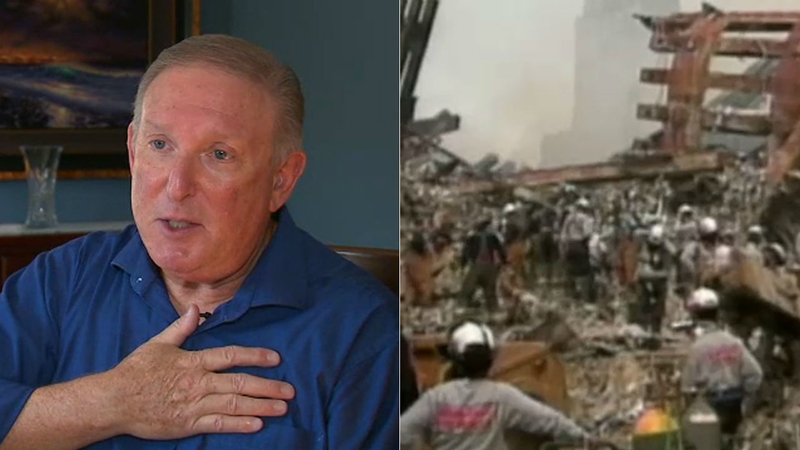 LOWER MANHATTAN (WABC) -- As the 17th anniversary of the 9/11 terror attacks approaches next Tuesday, there is a startling new revelation: more than a dozen men who were near Ground Zero have breast cancer.

Jeffrey Flynn says he first noticed it about eight years ago.

"I pick the dog up one day and the dog hits my breast and I said wow that's weird. That hurt," he said.

And then about a year later he felt a lump.

The East Meadow man says there is no cancer in his family. Yet he was diagnosed with Stage 3 breast cancer.

"After all the blood flushed out of your face you know I'm like are you sure?", said Flynn. "He says of course we're sure. Absolutely. He says you gotta make an appointment. He says you gotta come in. We gotta set you up for a mastectomy."

Flynn spent months around Ground Zero after 9/11. That's how he thinks he got it.

He was an account manager for data-storage company Dell EMC assigned to Goldman Sachs.

He retired early because of his health problems. He received a six-figure award from the September 11th Victim Compensation Fund, and the World Trade Center Health Program is helping cover the co-pays for his medications.

"This is cancer on steroids. It is fast. It is aggressive and it is deadly," said his attorney Michael Barasch, who says it's not just first responders on the pile who need to get checked.

And those who were down there should get checked before the victims compensation fund closes in two years.

"Male breast cancer is incredibly rare," said Barasch. "Only 1 in 100,000 men get it. There were 300,000 men down at Ground Zero or around Lower Manhattan, so that means only 3 of them should have had it. My law firm alone represents 15 guys with male breast cancer. It is staggering."

As for Flynn, after undergoing chemo he thought the worst was over but three years later the same cancer came back.

Deemed inoperable, he is now on medication for the rest of his life.

"I did not know men could get breast cancer. I'm being perfectly honest. I just did not know," said Flynn.