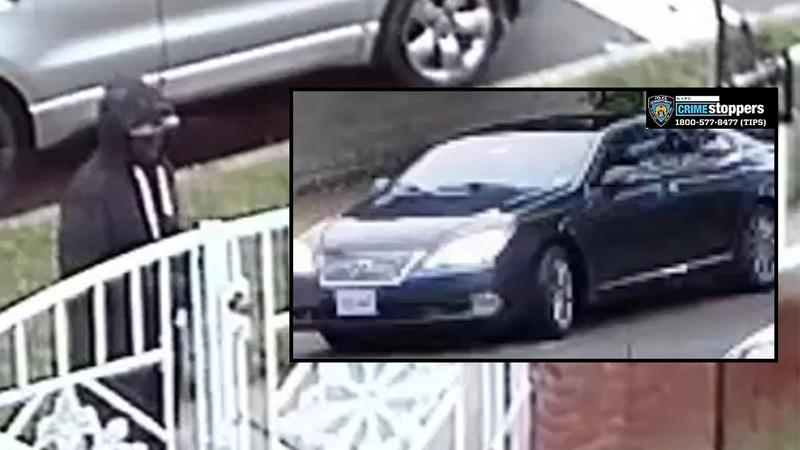 SOUTH OZONE PARK, Queens (WABC) -- Police are looking for the man who pointed a gun at a baby during a robbery in Queens, and they're hoping surveillance video will lead to an arrest.

Authorities say the 29-year-old victim was carrying her 1-year-old niece when they were approached by the suspect as they were walking into a home on 135th Place and Sutter Avenue in South Ozone Park.

Police say when the woman refused to hand over her cash, the man pointed his gun at the little girl.

"I'm thinking maybe he is coming to see someone here, I don't know," the victims aid. "So I turn my back from him and walking up the steps with the baby, he walks up the step and pushed me inside."

Once inside the home, he continued to demand the bag.

That's when she says he put the gun to her niece's head, and she handed over the bag immediately.

"Just give him what he wants, and I just hold her head and turn it away from him so she doesn't see what's going on," she said. "When he puts the gun to the baby, I give him the bag. And then he took it, and then he left."

In the expensive handbag was $7,000 in cash and a Rolex watch, and the suspect was caught on the surveillance video running off down the sidewalk.

Police believe he escaped in a dark colored car, and it is the victim's suspicion is that he may have followed her after she gave a woman $5,000 for a friend the day before.

In the handbag was the other half of the friend's money and her rent money. The victim now is just thankful she and her niece were not hurt, though she admits she is a bit traumatized.