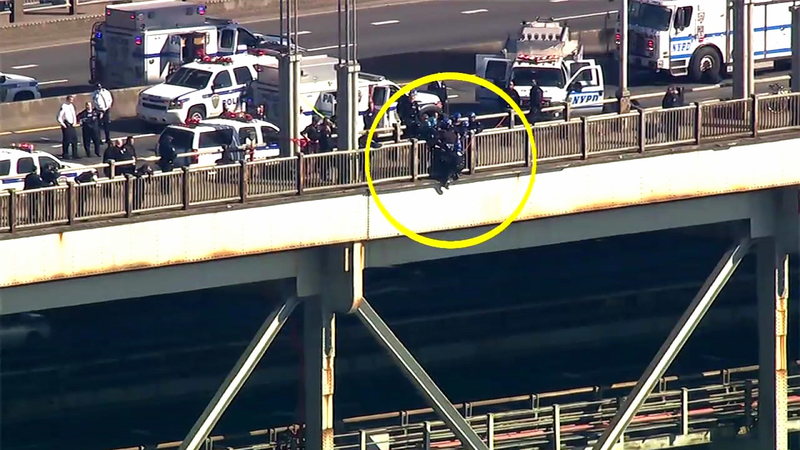 FORT LEE, New Jersey (WABC) -- A man holding on to the outside railing of the George Washington Bridge upper level was rescued Friday morning, and the dramatic ordeal was captured on camera.

The situation started just after 10 a.m. on the upper level of the bridge, causing police to shut down that part of the GWB in both directions.

Port Authority Police said the man was holding a weapon as he was hanging off the outside of the upper level railing.

During their rescue attempt, Port Authority Police were able to get the man to surrender the weapon -- what officials later described as a "starter pistol."

Officers continued talking with the man and eventually were able to pull him over the railing to safety.

According to the Department of Transportation, as of 10:20 a.m., police gathered on the westbound side of the bridge, mid-span. All lanes on the upper level were closed, but reopened before noon.

There was an apparently suicidal man on the upper level holding what officials later described as a "starter pistol."

They confiscated the gun, and Port Authority Police officers spoke with the man, who was holding on to the outside of the railing, eventually pulling him to safety.

How Port Authority Police handle people in danger on the bridge recently became a controversy because officers assigned to the bridge do not carry safety harnesses. That has forced them in the past to grab would-be jumpers at great danger to themselves.

The bridge reopened around 11:20 a.m., but police warned of delays.

A look at New York-bound traffic during the closure:

Stopped traffic on the George Washington Bridge after the upper level closed.