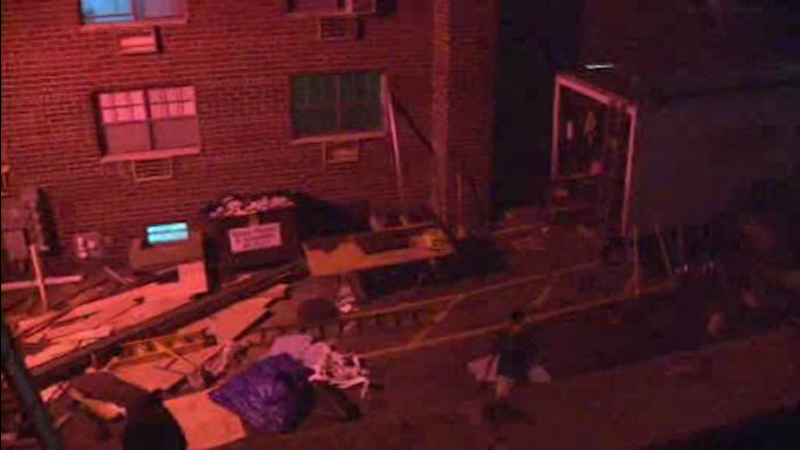 The incident happened around 3:30 p.m. at a three-story apartment building on Tracy Place.

The apartment complex is called "The Brookdale," which consists of about 200 apartments in 10 buildings in the garden-style complex.

"I got no comments, please. I'm sorry about what happened. Thank you," a coworker of the injured men said.

A coworker of the injured contractors was back at the scene, hours after visiting his friends at the hospital.

He watched them fall about 35 feet off a scaffolding that came loose.

Fighting back tears, with two of his colleagues now fighting for their lives, he was too distraught to say much more.

The workers were replacing the roof when it happened.

From the window above you can see ladders and equipment scattered everywhere as investigators surveyed the scene.

"There's a police officer saying, 'Come on stay with me brother! Stay with me!'" a resident said.

He says he's hired these workers before and says they've never had any safety issues in the past.

"They're supposed to have harnesses and helmets. I don't know if they did. I wasn't here," Schoonhen said.

"During this holiday season, I can't think of a more tragic event that would impact, impact the families," said David Troast, Hackensack City Manager.

The contractors work for Penn Roofing.

Eyewitness News reached out to them but have not heard back.

The injured workers were rushed to Hackensack University Medical Center which happens to be only a few blocks away.

Two of the workers were critically hurt, three are in serious but stable condition, and two other workers are in fair condition.