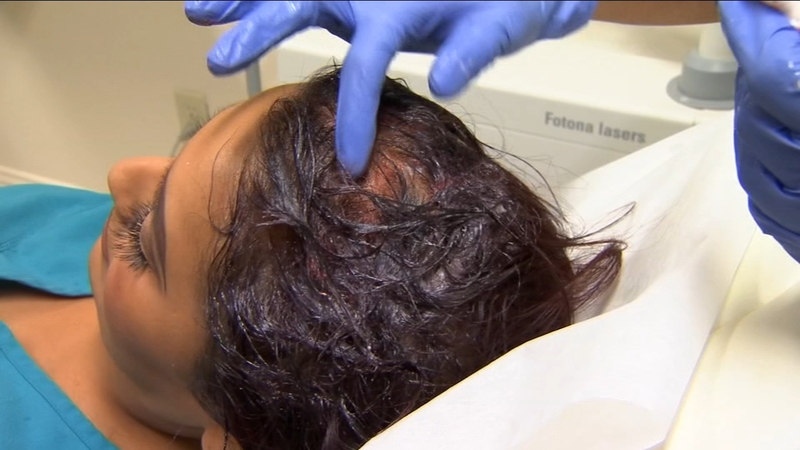 FRESNO, California -- Most people expect to experience hair loss at some point, but a new procedure is offering options to people who think they're going bald too early.

37-year-old Bravo says she began losing her hair in her early 30s.

"This is something that runs in my family -- thin hair. I've always had thin hair but it got worse as I got older," she says.

But she gained hope after hearing about platelet-rich plasma, also known as PRP, which helps stimulate hair growth by using your own blood.

"Our platelet have inherent growth factors and these growth factors can basically reaccumulate anything that has stopped growing," says Dr. Uma Rao. "Hair also makes us think of youth and when we go bald or have bald patches, we think we're getting old. But it also has this big impact on confidence."

Bravo is a medical assistant for Dr. Rao in Fresno, who tried the treatment on her for the first time.

Rao says the first step to PRP is numbing the patient's head an hour before the procedure. Then she'll draw their blood. The amount of blood taken will vary based on the extent of each patient's hair loss.

The next step is spinning the blood out to separate the platelets from the red blood cells.

"We basically just spin that blood and then it separates into different layers and then we just take the nice yellow plasma which is full of platelets," says Rao.

According to the United States National Library of Medicine, experts believe that the growth factors released from platelets act on stem cells in the hair follicles, which stimulate the development of new follicles.

"Now we are just using our body to heal itself or to regrow what has been lost," says Rao.

Next, she mixes an extracellular matrix with your platelets, which is a booster with more growth factors to help make the hair stronger and thicker. And then she begins the injections which last about ten minutes.

Rao says the treatment works best when the hair loss is recent, and the best candidates are people who are not completely bald but have noticable areas of hair loss.

"It will change my confidence a lot. I'll feel a little better about myself and the way I look. I'll be able to do different things with my hair than I do now where I just leave it flat," says Bravo.

She also says the amount of treatments vary on the patient, but you may start noticing new growth in 2 to 3 weeks.

"I'm excited for next summer with a full set of hair," says Bravo.