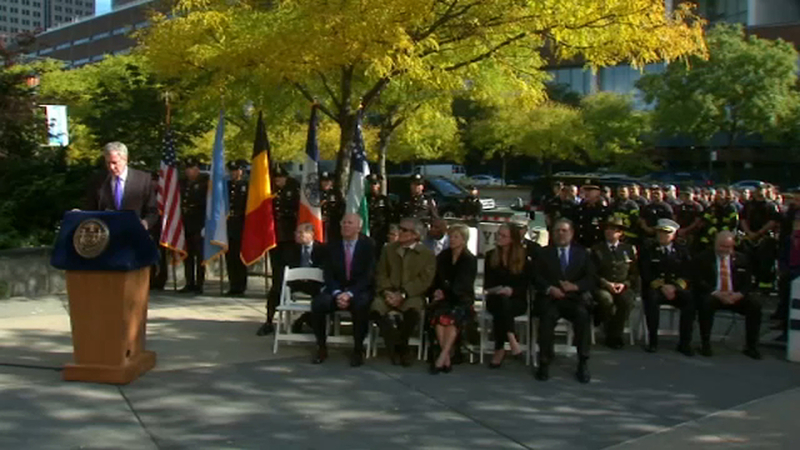 TRIBECA, Manhattan (WABC) -- The NYPD advises those attending the annual Halloween Parade in Greenwich Village to expect heavy security, with thousands of police officers deployed around the parade route.

The show of force comes on the one-year anniversary of the deadly terror attack on the West Side Highway bike path in which eight innocent victims, mostly tourists who were simply trying to enjoy a beautiful fall day in New York City, were killed.

"He passed me, hit me and kept going," victim Rachel Pharn said. "And I couldn't see anything much further down once I was on the ground."

The truck came out of nowhere, barreling down at a high rate of speed and striking runners and bicyclists. Pharn suffered a broken foot and ankle.

"I think the most important thing is to do what we did, was to honor the lives of the people who we lost that day," she said.

Mayor Bill de Blasio visited the scene of the attack Wednesday morning to pay tribute to the victims.

"You took a horrible situation that could have gotten much worse and stopped it and protected lives," he said. "We know, of course, of the story of the Argentine friends who were here celebrating together and it was a wonderful moment suddenly turned horrible."

The trial for 30-year-old suspect Sayfullo Saipov has not yet begun, but he has pleaded not guilty.

By Wednesday night, though, Sixth Avenue will be painted with thousands of fantastic costumes and almost a million spectators -- full of goblins, ghouls and anything under the sun.

But as much time and creativity as participants put into their costumes and floats, law enforcement put even more time and expertise into keeping everyone safe.

Last year's parade happened just hours after the attack, and the city made every effort that night to let the parade go forth. And it did -- without incident -- much to the credit of the NYPD and brave New Yorkers who refused to to cower in the wake of such horrible violence.

"One year ago, we endured the worst terror attack in New York City since 9/11 in terms of loss of life," NYPD Commissioner James O'Neill said. "The truck terror attack on the West Side Highway proved only to steel us against any person or organization that threatens us with violence."

This year, the NYPD is mindful of the recent explosives sent in the mail and the deadly shooting in a synagogue in Pittsburgh. So there will, of course, be a parade, but there will also be an army of protection to safeguard Halloween.

"We will have deployed thousands of plainclothes as well as uniformed members of the service," Chief of Patrol Rodney Harrison said. "As well as our Critical Response Command, our Strategic Response Group, K-9, aviation, as well as Emergency Service Unit will be deployed."

Those who planned to attend said they were not scared.

"That's what we do as New Yorkers," one woman said. "We move on and we move forward. So I have full confidence that the city is taking every possible step to ensure our safety."

This year's theme is "I am a robot," which is sure to inspire thousands of creative costumes.