NYPD officer gives family $20 so they can attend Hamilton 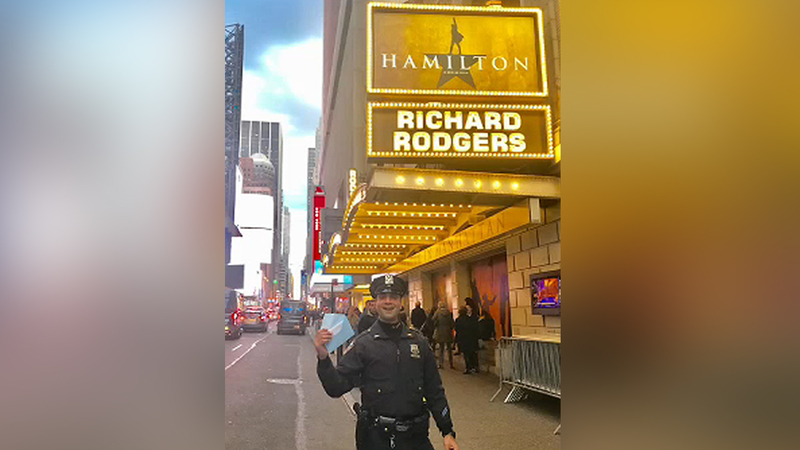 NEW YORK (WABC) -- A family that traveled from Ireland to see one of the hottest shows on Broadway almost lost their chance.

But a New York City police officer saved the day and now is being praised for the help he provided.

Back in March, a woman frantically came up to Officer Ricardo Dicandia in Times Square, saying she was $20 short for tickets to treat her daughter to 'Hamilton' for her birthday, and about to lose her place in line.

Officer Dicandia handed over the cash without hesitating.

Recently he found out that woman sent a letter to the Mayor's office, praising him for his kindness.

"I happened to have $20 on me, I gave it to her," said Officer Dicandia. "Just to see her face and the kids was enough for me, and was just glad I was able to help out."

Officer Dicandia hasn't seen Hamilton himself. As he points out, it's pricey and tickets are hard to get.

$20 Hamilton tickets?? When Geraldine found out she was $20 short for Hamilton tix after standing in line for 4 days, the Irish tourist ran for help - and luckily met Officer Dicandia. He pulled a 20 out of his pocket so she didn't have to throw away her shot. #WorldKindnessDay pic.twitter.com/jyhLfV7Fkv