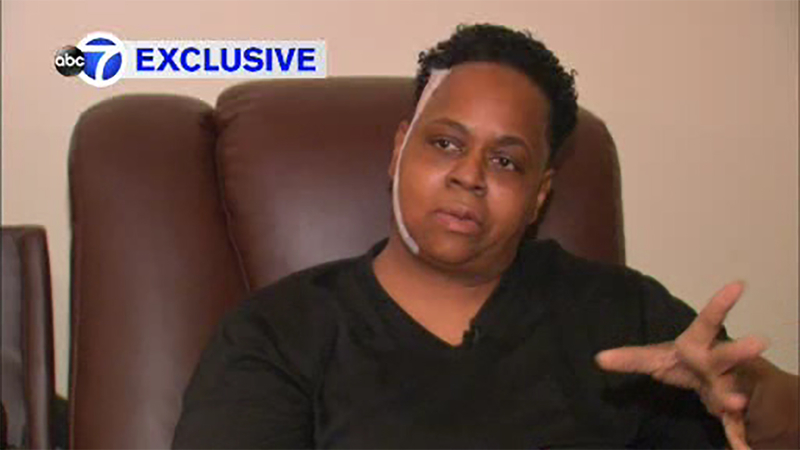 HARLEM, Manhattan (WABC) -- In an Eyewitness News exclusive, a woman is describing a terrifying incident in which she was attacked by two men outside a Harlem bar.

The 52-year-old woman was beaten with a bat and slashed after what started as a minor disagreement escalated.

"This man's trying to kill me," said the woman named Carolyn.

She may have been right. On a sidewalk in Harlem, a man was attacking her with a baseball bat.

"He hit me over several times with that bat and all I could think about was my head getting busted so I kept holding this arm up to protect my head," she said.

That may have saved her life. The huge defensive bruises can still be seen on her arms. And there is a scar on her face, the result of a second man slashing her on the sidewalk.

"A guy came on the side and I just felt somebody take something and go straight down my face. Sharp," she said.

Carolyn says it started inside Lorraine's Bar on Adam Clayton Powell Boulevard in Harlem. A man was using the ladies restroom when she went in to use it.

"He said I'll use any (expletive) restroom I wanna use. I said whatever man." she said.

The man warned her not to come outside, but she thought it was over. It wasn't.

"All I could think of was my daughter, that's all. I'm like, I can't let them take me out," said Carolyn.