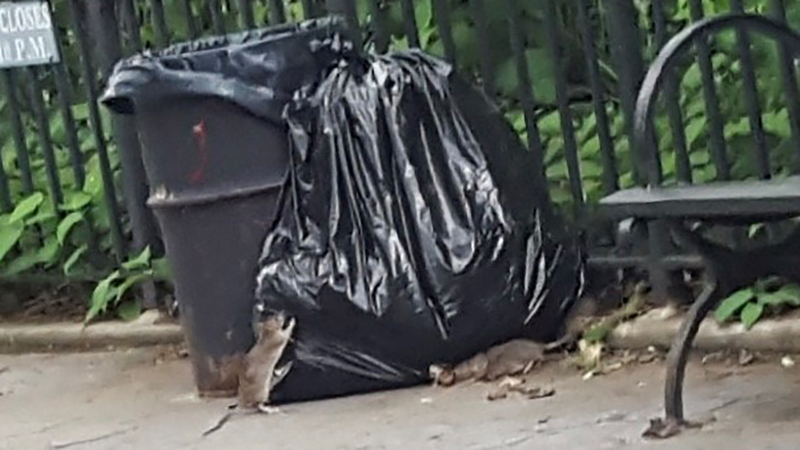 HARLEM, Manhattan (WABC) -- The New York City Department of Sanitation's plan to clean up the city, not by adding trash cans but by removing them, is drawing the ire of some communities.

Bags of trash are piling up in neighborhoods, part of a strategy to cut down on litter that many say isn't going entirely according to plan.

At one corner in Harlem, there is only one wastebasket left.

"We turn around, and they took all our cans," resident Jolinda Ruth Cogen said. "We had eight cans."

Cogen says the city's strategy to stop illegal personal dumping in the baskets, which are meant for pedestrian traffic, is not working. People continue to throw trash where cans once were and are even using the park across from her home as a dumping ground, attracting rodents. And now, she's being forced to take responsibility for other's transgressions.

"They drop it in the street, like that cup there, and this homeowner is responsible for 18 inches in the street," she said. "Which means you will get a ticket."

The sanitation department released a statement, saying in part, "Misused baskets are an eyesore and cause quality of life issues. Removing baskets is just one of the measures we use to ensure clean streets and sidewalks."

Officials say more than 1,000 trash cans were removed in the last year all over the city because of misuse, but Harlem took the big hit with 223 cans gone. However, not everyone has a problem with the decision.

"I'm sorry the garbage cans are gone, but it has somewhat reduced the issue of people putting garbage on corners," The Edge Harlem owner Justine Masters said.

Masters doesn't miss the trashcan that once stood right at her corner, in plain sight of her customers.

"It was a huge nuisance," she said. "Unsightly. It attracted flies."

A few fines they are willing to deal with, but most are just hoping everyone can mutually love and respect the community they call home.