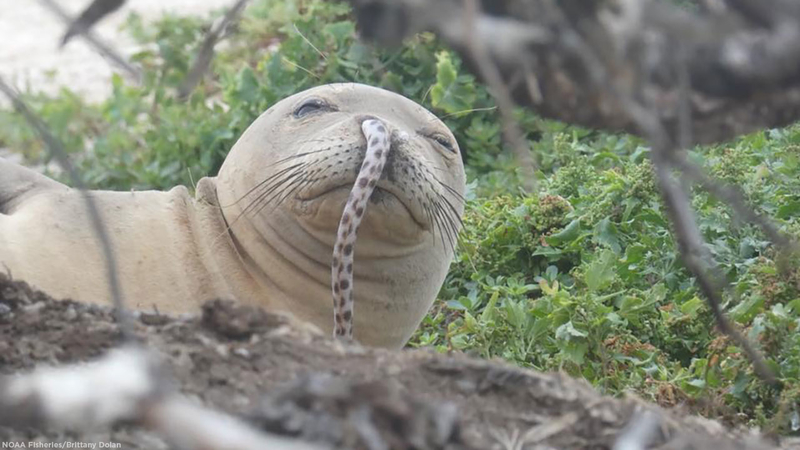 NORTHWESTERN HAWAIIAN ISLANDS -- Endangered seals in Hawaii keep getting themselves into a pickle that scientists just can't quite figure out: they're getting eels stuck in their noses.

NOAA Fisheries researchers said earlier this week that, after studying Hawaiian monk seals for four decades, they've now seen "three or four" instances of eels getting trapped in a seal's nose. One recent instance, documented in a photo shared on NOAA's Facebook page, happened over the summer at French Frigate Shoals on the Northwestern Hawaiian Islands.

In each case, NOAA researchers were able to successfully extract the eels. While the seals escaped unharmed, the eels weren't so lucky.

Scientists have two different theories, both involving different points of entry, to explain how the eels could have gotten trapped: "Hawaiian monk seals forage by shoving their mouth and nose into the crevasses of coral reefs, under rocks, or into the sand. They are looking for prey that likes to hide, like eels. This may be a case of an eel that was cornered trying to defend itself or escape. Alternatively, the seal could have swallowed the eel and regurgitated it so that the eel came out the wrong way."

Despite their hunch, NOAA said in a blog post that the recent spate of eels in noses could be nothing more than a "strange statistical anomaly."

The seals involved were monitored by NOAA's Hawaiian Monk Seal Research Program, a team that studies various populations of the endangered seals across Hawaii. The species, which lives only in US waters, has been described as "one of the most endangered marine mammals in the world."