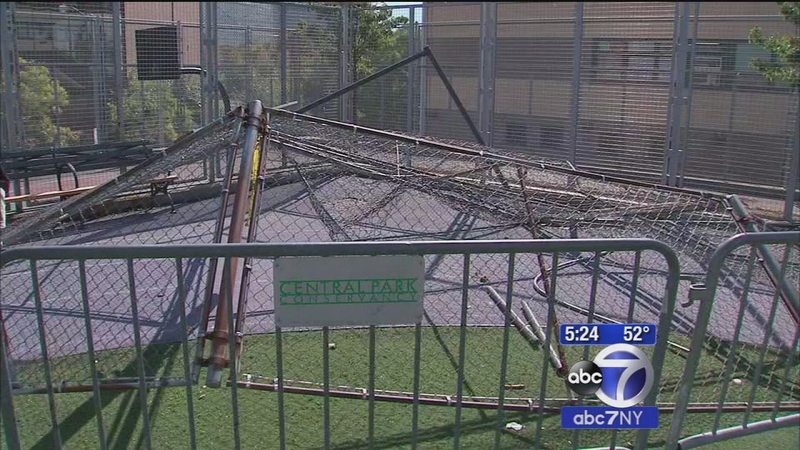 7 On Your Side: Battered batting cage causes safety concerns

HARLEM (WABC) -- "Batter up, heads up" took on new meaning at an elementary school in Manhattan after a baseball backstop collapsed at the field this past summer. And it's stayed on the ground, metal pieces jutting out, ever since.

It was a big hazard for kids, until they went to the bullpen and called for relief from 7 On Your Side.

The last time we asked the New York City parks department for help, they moved an abandoned boat that was a causing an issue in Sheepshead Bay, towing it away days after we sent them an SOS.

So when Eyewitness News got calls about the busted backstop stuck in a public school playground, the parks department would be the agency to throw a fastball and fix it. And after our calls, they took the extra step and carted it away.

Students throwing the ball outside PS 161 in Harlem had to make sure they avoided the mangled metal covering the southeast corner of the field.

"It needed to be removed immediately, not that 'we are going to get to it,'" principal Pamela Price said.

She says the eyesore on the mixed-use field shared by three schools and community groups collapsed over the summer, and she struck out getting the broken backstop out of there since school started.

"Nobody wants to remove it," she said. "For some kind of negligence of something that could happened to a child, and that's my bottom line. These are my kids."

The parks department immediately responded by putting safety barricades up, but parents and teachers said they kept getting knocked down.

"Our biggest concern is these sharp points and a kid tumbling onto that," PS 161 development dean Peter Kornicker said. "I have a horrible image of a kid getting impaled."

The secretary of the PTA said parents have complained to 311 for weeks.

"I've seen them come and look like it was a specimen," Price said. "But no one said, 'it's going to be gone in two weeks.'"

So 7 On Your Side put in a call to the parks department, which got on top of it by the time the bell rang the next morning.

Now, the football team's coach can finally host a home game, and both student the community can enjoy the park space safely.

"Guys were out here this morning, took them less than an hour," coach Brien Ling said. "Field was clear, all the kids was smiling because of what you did."

A parks representative thanked Price for telling them about the battered backstop at the start of school. They said they secured the area and were taking steps for removal. But after our calls, they took the extra step and carted it away.
Related topics:
health & fitnessschool boardschool7 on your side
Copyright © 2021 WABC-TV. All Rights Reserved.
7 ON YOUR SIDE
How Amazon is supporting small businesses on Prime Day
Delivery sends heavy truck tires rolling down stairs, causing hundreds in damage
What to buy and what to skip on Amazon Prime Day
Tips to avoid short-term summer rental scams
TOP STORIES
9 children, 1 adult killed in accident on interstate in Alabama
6 celebrating at family gathering struck by vehicle in NYC, suspect flees
Spacewalking astronauts tackle solar panel work
COVID Updates: 1st Olympic athlete tests positive for coronavirus
New photo, info on suspect wanted in brazen shooting; kids seen running for cover
Remembering Junior: 3 years since Lesandro Guzman-Feliz's murder
AccuWeather: Hot, humid but nice for dad
Show More
Claudette poses no threat to NYC area at the moment, but south feels impact
9/11 firefighter with ALS shares wedding day joy with daughter
What to know about voting in NYC's mayoral primary
NYC elections: What is ranked choice voting?
Candidates make final pushes ahead of NYC mayoral primary
More TOP STORIES News