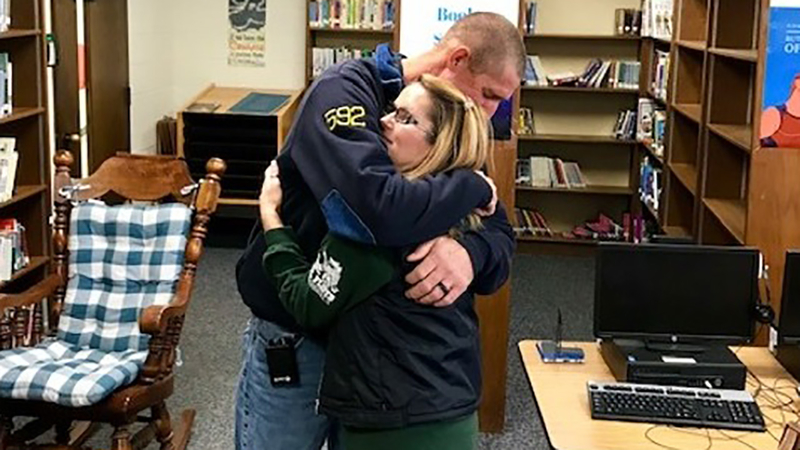 SHIRLEY, Long Island (WABC) -- For the past 20 years, Kristine Gawlowski, of Shirley, has been battling benign brain tumors. She's undergone seven reconstructive surgeries, and at one point, she had brain swelling and had to be fed through a feeding tube for 11 months.

"I often told my mom that there has to be a reason that God kept me alive, that I've survived that I'm still here," the mother of four said. "There has to be a purpose."

Gawlowski may have found her reason.

About a year ago, Gawlowski was on social media and saw a post by one of her co-workers at Tangier Smith Elementary School in Mastic Beach. Amy Surrey had posted that her husband was in dire need of a kidney donor. The couple from Mastic Beach has five children.

Artie Surrey, 44, has polycystic kidney disease, which results in cysts overtaking his kidneys. About two years ago, his kidneys began to fail. Doctors advised him he should get on a kidney donor list.

Gawlowski recounted Wednesday to Eyewitness News reporter Kristin Thorne how she approached Amy Surrey about becoming a donor for her husband.

Amy Surrey admitted she initially tried to talk Gawlowski out of it, because of Gawlowski's previous health battles.
"She was very adamant about it, and I'm so grateful," Amy Surrey said, while hugging Gawlowski.

Gawlowski began the process for approval to become a donor in February. It took many months to get approval, because Gawlowski had to get approximately eight to 10 doctors to sign off on the procedure.

The doctors, including an ENT, a neurologist and a radiation oncologist, had to ensure that Gawlowski could survive the procedure and recovery due to her past health battles. Humans are able to function perfectly with only one kidney.

"It's like a light at the end of the tunnel," he said. "To be able to think that I'm going to be off of dialysis and not stuck to that chair for four and a half hours a day, three days a week."

The surgery is scheduled for December 4 at Stony Brook University Hospital. The Mastic Beach Fire Department, where Artie Surrey is a lieutenant, is holding a fundraiser for Gawlowski.

The goal is to raise money for Gawlowski for the three to six weeks she will have to be out of work recovering from the surgery. A spaghetti dinner will be held Sunday, December 2, from 4 p.m. to 8 p.m. The cost is $15 per plate.

Click here for more information on becoming a kidney donor.