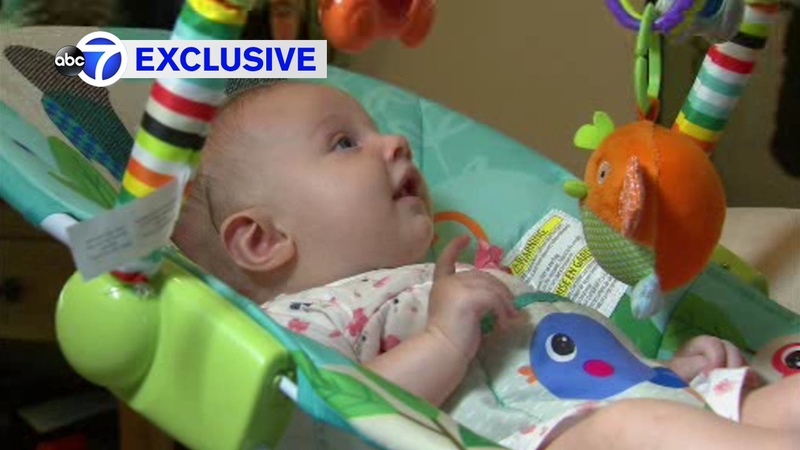 NEW YORK (WABC) -- A family from Brooklyn is outraged after their infant girl was exposed to measles on a flight out of LaGuardia.

Fliers in more than a dozen states were put on notice about the contagion on board.

The American Airlines flight from New York landed in Chicago before continuing on.

7 On Your Side Investigative Reporter Jim Hoffer talked exclusively to the family and the CDC to find out how this happened.

The Kowalski's 12-week-old baby Molly is half way through her 28 -day quarantine ordered by the NYC Department of Health following an American Airline flight to visit family in Wisconsin.

The cautionary measure taken after the Centers for Disease Control learned that a passenger on board Flight 0337 had been diagnosed with full-blown measles shortly after the flight.

Using the flight manifest, the CDC through local Health Departments notified passengers in 13 states who flew on the LaGuardia to Chicago flight.

"For our daughter, she's not had any of the shots, so we had to rush her to the closest children's hospital as soon as we could," said Tom Kowalski, father.

The Kowalski's are upset because they say it took too long to be told a passenger on-board had measles.

Five days after the flight, they received a phone call and this email notification from the Health Department informing them their baby was at "high risk for getting sick" and that they had "six days from exposure" to get an immunity booster shot to protect the newborn.

That left them just 24 hours to get Molly the special injection.

The Kowalski's say they noticed the ill 12-year-old passenger before take-off recalling how weak she looked.

They're unsure if American Airlines staff suspected the passenger was sick but they remember upon boarding that the flight attendants were giving her a lot of attention.

"It seemed to us something was up and after the flight I noticed her in terminal getting out of a wheelchair and being assisted into the bathroom," said Lori Kowalski, mother.

American Airlines says there was no request for a wheelchair from the passenger.

A spokesman saying, "If staff notices a passenger might not be fit for travel" they will consult medical personnel to determine if passenger should not fly.

The spokesman added they, "will rebook them on a future flight without penalty or provide full refund."

The Kowalski's are counting down the days until their baby's quarantine is over, while worrying about every sneeze or sniffle being a sign of measles.

"We check her temperature every day, see if she has a fever, red spots, could this be start of a rash?" Lori said.

"She was only 12 weeks old yesterday, so her immune system is very, very young," Tom said.