WABC
By Joe Torres
SOUTH BRONX (WABC) -- Political leaders and health officials are set to hold a meeting on Monday night after a seventh person died due to Legionnaires' Disease in the Bronx. There are now 81 confirmed cases of the disease since July 10.

A town hall meeting was held Monday night to help answer some of the residents many questions in the Bronx.

"We want to make sure the public is aware of the disease outbreak but educated about the causes, the factors," she said. "We want to caution everyone to not be alarmed."

For 40-year-old Ramel Hagins, it was a call to 911 that meant the difference between life and death, and by the time he arrived at the hospital, he was gravely ill.

"They told me he was very, very ill, critically sick, fever 105.4, his sugar was up, and they said some type of bacteria, a bad strain of pneumonia, but they weren't sure," said Vivian Edwards, Ramel's mother.

His mom Vivian Edwards says he was already in a medically induced coma by the time doctors figured out he had Legionnaires' disease just in time to save his life.

Monday night, so many people packed into a town hall meeting on the Grand Concourse, doctors had to go outside to answer questions from those who couldn't make it in.

But it turns out, even the experts are stumped.

"Why this big of an outbreak? With this many people who have suffered? In just these neighborhoods? We don't know the answer right now," said Dr. Jay Varma, of the NYC Health Department.

"Why my son?" Edwards said.

Ramel has now turned the corner, he's off the ventilator, but it will be a long recovery after a terrifying week.

"I've done a lot of emotional crying, I'm trying not to get emotional now. Because he was very sick and they kept using the term critically sick. And he's slowly getting better but he's going be in ICU for a while," Edwards said.

Since the outbreak, city leaders have confirmed several dozen cases of legionnaire's disease and a handful of deaths. Five South Bronx buildings had their cooling towers cleaned, though it's still unclear which tower is spreading the Legionella bacteria.

"We don't know where it's coming from exactly," Bronx Borough President Ruben Diaz Jr., said. "But what we do know is they tested some of the the buildings where none of the people walked into, and those buildings also tested positive. And luckily, we didn't have any cases coming out of those buildings."

Each site will now submit a longer-term plan to show how they will prevent future growth of the bacteria.

Locations and Remediation:
- 22 buildings visited in the cluster area and 17 were identified to have cooling towers
- All 17 have been tested and all results have returned
- 5 buildings have tested positive

- All sites will submit long-term plans as to how they will maintain the cooling towers to protect against any future growth of Legionella - those plans are due Friday.
- New York City's drinking water supply and other water features, like fountains and pools, are safe throughout New York City and are unaffected by Legionella.

Mayor Bill de Blasio released a statement Monday night saying, "Legionnaires' Disease has been a persistent public health threat for years, and has intensified in both New York City and across the nation over the past decade. The City continues its immediate response to the current outbreak of Legionnaires' Disease in the South Bronx - including comprehensive cleaning and remediation of infected sites, treatment of those who have contracted the disease, and a vigorous public information campaign to ensure people know the facts.

"However, a more systemic solution is required to prevent the cycle of these outbreaks from continuing. This week, new legislation will be announced designed to halt future outbreaks of Legionnaires', and place new emphasis on long-term prevention. The comprehensive package will address inspections, new recommended action in the case of positive tests, and sanctions for those who fail to comply with new standards. Legionnaires' Disease outbreaks have become far too common over the past ten years, and the City will respond not by only addressing an outbreak as it occurs, but with a new plan to help prevent these outbreaks from happening in the first place."

Maldonado lives and works close to the Opera House Hotel, which had its cleaning tower disinfected after the Mott Haven building tested positive.

"The city is going to take care of it before something else happens," he said. "This is New York City, one of the best cities in the whole world."

Streamline Plastics Company on Park Avenue in the Bronx is the last of five sites health officials have positively identified as being a possible source of this Legionnaires cluster.

Deputy Health Commissioner Dr. Jay Varma expects the number of Legionnaires' cases' may increase as the search for the source continues.

"We think it is very possible that there will be an increase in cases over the next seven days," he said. "We are also quite confident that after that time, the number of cases will go down. We can never know for sure what the future holds and we are working very aggressively to make sure people at risk - people in senior centers, people at homeless shelters, people with other medical problems - get the message to pay attention to their health."

One man who has had to battle the bacteria is Daniel Tejada.

"I was about to wait one more day to go to the hospital and if I would have waited that one more day, I don't think I'd be here right now," said Tejada, who was back home in the comfort of his family Saturday night, something he'll never take for granted again.

He was just released from the hospital after a near month-long stay in the ICU in a medically-induced coma, battling Legionnaires'. How the 31-year old cab driver contracted the bacteria is a mystery.

"I can't say where I got it from because I'm a cab driver and I'm everywhere so I could have caught this in any borough," he said.

Symptoms of the disease include headache, fatigue, loss of appetite, confusion and diarrhea. These usually appear two to 10 days after significant exposure to Legionella bacteria. 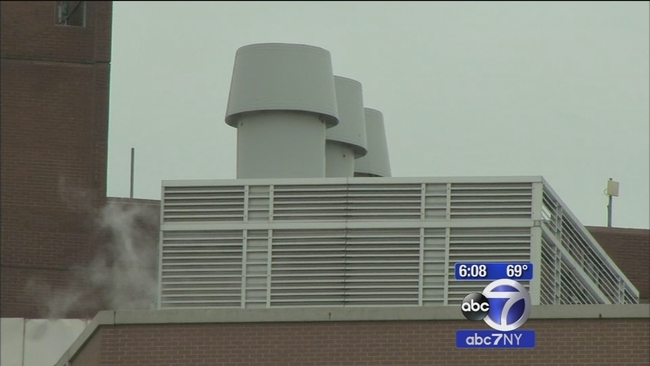