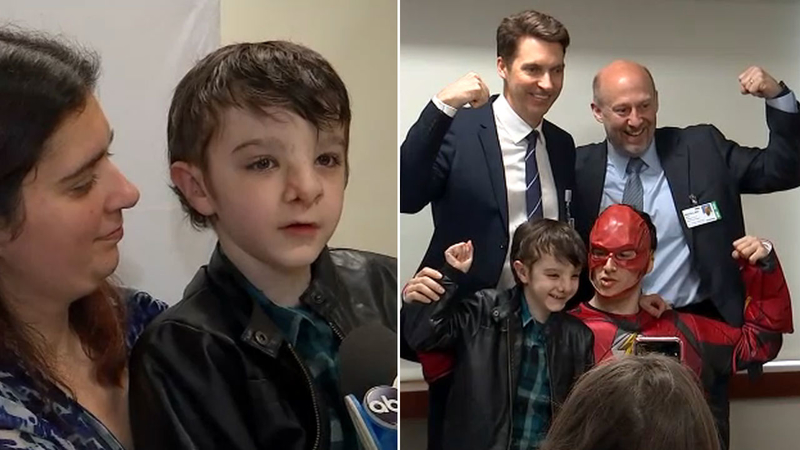 NEW HYDE PARK, Long Island (WABC) -- A 9-year-old boy feels like a superhero after a life-changing operation on Long Island.

Simao Meco was born with a rare facial cleft that affected both his vision and breathing. On Thursday, he reunited with the team that gave him a new face and new outlook.

Simao was all smiles after the long road to get where he is now -- including sleepless nights and bullying at school.

His plastic surgeon at Cohen Children's Medical Center, Dr. James Bradley, explained how he had to loosen Simao's entire face in order to move it back together again correctly.

"Because the anatomy essentially is abnormal so we had to figure out how to make it normal, so he could have a good result," Bradley said.


Simao's condition, called a Tessier rare craniofacial cleft, left the two sides of his face not aligned. He needed seven hours of surgery so that his eyes could finally look in the same direction and so his nose could be rebuilt from scratch.

Bradley is one of only five surgeons in the world doing the facial bipartition surgery because of the risks involved.

Simao's case is the first of its kind on Long Island. But for Simao and his single mom, it's a new lease on life.

The whole operation was done pro bono and so after what felt like a nightmare and more than any young child should ever have to endure, Simao is finally feeling as good as he looks.

His face said it all as the hospital arranged for him to meet his favorite superhero, but there was no doubt to everyone in attendance that Simao is actually the bravest superhero around.

It was a heartfelt sendoff for a 9-year-old NJ boy after undergoing a life-changing facial reconstruction.