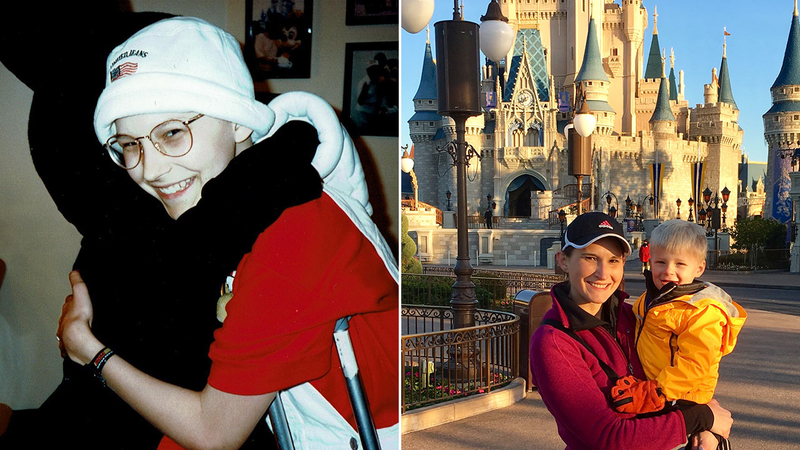 Dr. Jen Pratt was only 11 years old when an unrelenting pain in her knee landed her in the pediatrician's office. After an X-ray revealed that a tumor was growing in her femur, her entire world was flipped upside down.

"Rather than being just a kid, I was forced into a world of doctor appointments, scans, hospitalizations, and surgeries," Jen tells Babble.

Diagnosed with osteosarcoma, a form of bone cancer, Jen soon learned that despite how overwhelming the situation was, the only thing she could do was to take the challenges one day at a time as she fought through chemotherapy and surgical interventions done in an effort to save her life.

"Getting through treatment is like a marathon," she explains. "You just need to put one foot in front of the other to keep on going, with hopes of a finish line in mind."

A finish line, which for her, included a perfectly timed Make-A-Wish trip to Walt Disney World - specifically the area called Give Kids the World, reserved just for Make-A-Wish children and their families.

"We scheduled the trip at the end of my treatment, and it turned out to be a once-in-a-lifetime, simply magical experience," Jen reminisces. "It was so much more than just a vacation - it was a celebration! I was able to enjoy just being a kid and finally look forward to returning to a new normal. It's difficult to put into words the overwhelming feeling of love and support you feel as a wish kid."

And that support is what makes Jen's story even more unique, because not only did she return to Disney as a volunteer at Give Kids the World, but she also returned to the very same hospital, Children's Minnesota, that saved her life - this time to work as a doctor saving the lives of sick children.

"When you spend days to weeks on end in a hospital, it turns into your 'home-away-from-home,'" Jen explains. "I have always felt comfortable at Children's and feeling naturally drawn back to a place where I was so comforted and supported as a child, I continued to stay connected by volunteering and working with a peer-run support program for teens with serious illnesses. So, when I was given the opportunity to work at the very same hospital that had given me care as a child, it was a natural fit!"

Now working as a pediatric hospitalist, which is a pediatrician who specializes in the care of hospitalized patients, Jen says that her time spent in the hospital as a child is part of what allows her to be a better doctor today.

"Surviving childhood cancer is a uniquely profound experience," she says. "We often see the world in a slightly different light and have a unique ability to empathize with others facing challenging, life-altering situations."

Being filled with overwhelming gratitude to the people who stepped up so many years ago to save her life, Jen doesn't hold back when she says that from the physicians to the nurses, physical therapists, and child life staff, she considers the people who cared for her to be her "personal superheroes" - which is why she has been drawn toward wanting to deliver the same top-notch care that she experienced as a kid.

"Not only do I work with an amazing team, but being a hospitalist has been the perfect fit for me," explains Jen. "I get to witness the incredible resilience of children every day and am able to draw on my experiences to provide kid-centered care that goes beyond what can be learned in a classroom or textbook, and in the end, get to share in the joy of sending a child home from the hospital healthier, and happier."

Planning to volunteer once again at Give Kids the World in November, this time with her husband Steve and 3-year-old son Benjamin, it's easy to see how Jen's story has come full circle. But, as she points out, when people think about childhood cancer, they rarely think about the paths these children take into adulthood.

"If there is anything that I could say to a child fighting cancer," she says, "it would be that whichever path you take in life, you have the ability to use your experience for the better, to see life differently, and to empathize with others in a uniquely powerful way. Don't be afraid to dream big, and never stop looking towards the future."

More on Babble:
Teen Suicide Survivor Becomes Brave New Face of Netflix's "Tell Them" Campaign
Mom Donates Her Own Embryos After Hearing 2,000 Were Lost in a Fertility Clinic Malfunction
This Is What Childhood Cancer Looks Like