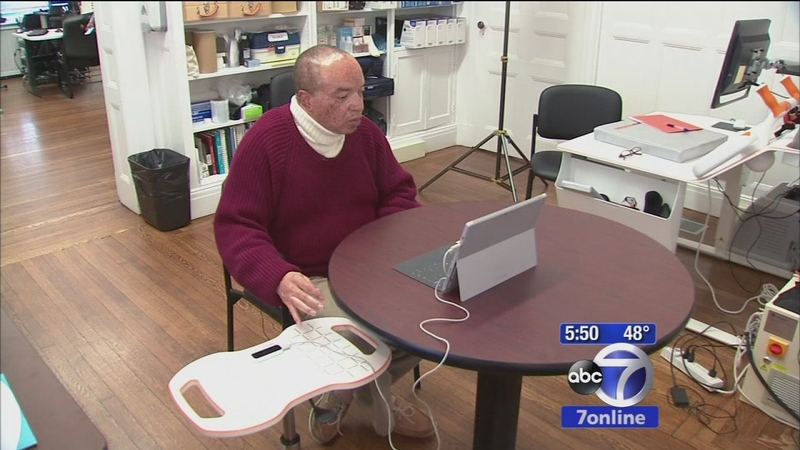 WHITE PLAINS (WABC) -- Loss of the use of limbs is the most common side effect of strokes, and hundreds of thousands of people suffer one every year.

Now a video game developed by researchers in Westchester is helping stroke patients in their recovery.

"It got my brain working with my hand you know, I noticed that right away," said 63-year old stroke patient Fred Watson.

He says a video game is helping him regain the use of his right hand, impaired when he suffered a stroke about six months ago.

Both Fred and the game were part of a just-completed study at Burke Medical Research Institute in White Plains.

The six-week pilot program set out initially to simply see if chronic stroke patients, like Fred, would be comfortable using the game, and whether they would enjoy it.

But the lead researcher says what they found was so much more.

"What we noticed was that all of them had significantly improved motor function," said David Putrino, Ph.D., Director of Telemedicine and Virtual Rehab at Burke Medical Research Institute.

He developed the game. A motion-capture device utilizing infrared technology allows the patient's hand movements to control the movements of an airplane, flying it through various obstacles and loops.

As the patient's manual dexterity improves, the game gets harder.

That's exactly what Fred says he did, and it paid off.

"Oh yes, there's a big difference. Just the movement of the hand is simple," he said.

Researchers say the next step is to get this therapeutic video system into homes.

"The thinking behind it is, if this is what you got out of 30 minutes, three times a week, imagine what you get if you're just sitting there doing it all the time," said Putrino.

"I would play this video constantly because I know it does get the cognitive skills going," said Fred.

In fact, there are future plans to use this same protocol for children with cerebral palsy, though researchers admit they would have to step up their gaming technology.

"The younger kids who actually know what a good video game looks like, they said absolutely not playing this game, you guys need to go back and do better," said Putrino.