Race against time to save baby diagnosed with botulism 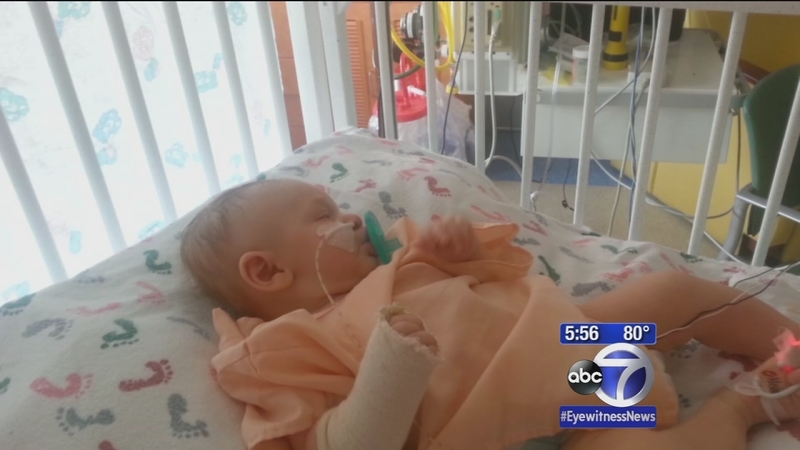 NEW YORK (WABC) -- Parents panicked when their 3-month-old baby suddenly became sick and ended up in the hospital.

He was diagnosed with botulism, a potentially deadly condition, and getting the treatment wasn't easy.

"All you want is your baby to be back to normal," said Meredith Roig, Tyler's mother.

But 3-month-old Tyler Roig was lethargic, losing muscle tone, and getting worse. And on July 2nd, he ended up in intensive care at St. Barnabas Medical Center.

"His cry was weak, he wouldn't eat, he was miserable," Roig said.

Tyler had no fever, normal blood work, and wanted to eat but couldn't.

Chief of Infectious Disease Dr. Uzma Hassan says those are clues that led her to diagnosis of botulism.

The toxin paralyzes muscles, leaving babies unable to eat or breathe. There is a treatment, an antitoxin called babybig, but you can only get it from the California Department of Public Health and it costs $45,000.

For that antitoxin to work it has to be given within a few days. But the test to confirm the diagnosis can take up to a week. That means doctors have to act fast and make a decision before it's too late.

Dr. Hassan had the medication flown across the country.

"I was crying and praying, I was afraid, you're putting this into the body of baby and we don't know what it's going to do," Roig said.

Tyler immediately started to get better. Soon after, the test results came back confirming that he had botulism.

The condition affects about 100 babies a year.

Botulism toxin is the same substance in Botox used to treat wrinkles.

It comes from bacterial spores often found in the soil but if those spores are ingested, the toxin takes over a baby's undeveloped digestive system.

Dr. Hassan says construction and dust may play a role.


"It may be that the soil turning around could have triggered a release of spores in the environment," Dr. Hassan said.

Meredith and her husband say they are grateful for the correct diagnosis and want other parents to be warned.

"Just be aware that this is possible," Roig said.

Botulism spores are also found in honey. That's the reason new parents are told to never give their baby honey.