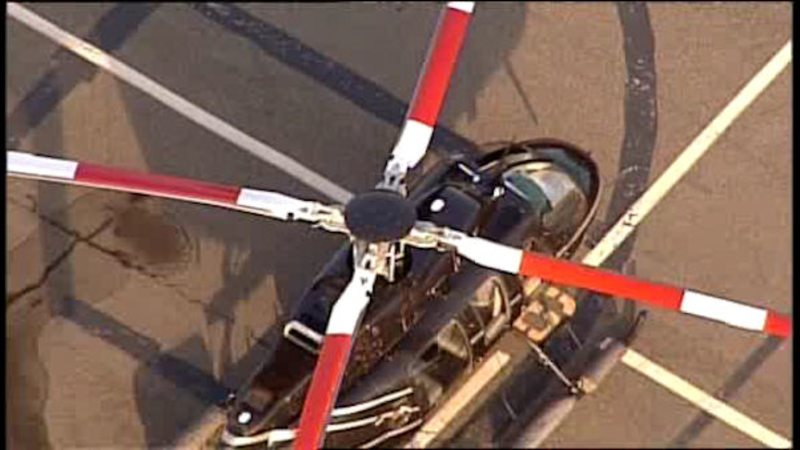 NEW YORK (WABC) -- A tour helicopter made an emergency landing at the West 30th Street Heliport after a bird apparently struck the windshield.

The Bell B407 helicopter, owned by Helicopter Flight Services, landed without incident at around 2:45 p.m. on Friday.

In one flash, a picture perfect day for a helicopter ride over Manhattan turned into a terrifying ordeal when a bird strike the passenger front window of this chopper. The window shattered on impact.

"It was pretty much like an explosion going off in your cockpit, a little bit of a pandemonium kind of thing, you know, you have to gather yourself and we headed over to 30th Street," said Tim McCormack, the helicopter pilot.

Pilot Tim McCormick put all his training and 20 years of experience to work. He says he never lost control of his craft. Despite missing his front window, despite not being able to hear anything, he calmly and safely landed his bird at the 30th St. heliport.

"To LGA Tower 9TD just hit a bird strike; we're going to be heading for 3-0. If you can hear me we are declaring emergency. I cannot hear you, but we are heading for a spot to land," McCormick said to Air Traffic Control.

McCormick was flying a bell 407 seven-passenger helicopter Friday afternoon. He had six female tourists on board. They had viewed downtown, Coney Island, and we're heading back from Yankee Stadium when the bird hit. It was perhaps a seagull. The pilot tells Eyewitness News the women started screaming and crying. He had no choice, he had to stay calm and find in emergency place to land.

"They were happy when we got on the ground, everybody was happy, and then it turned into, OK everybody is safe," McCormick said.

Amazingly, the woman in the front passenger seat was not injured when the window shattered on her.

She suffered just a minor scratch. Most importantly all are safe. The women will have quite a New York story to tells when they go home.

Meanwhile, the hero pilot had to submit to a drug and alcohol test, which is required anytime there is a flight accident.