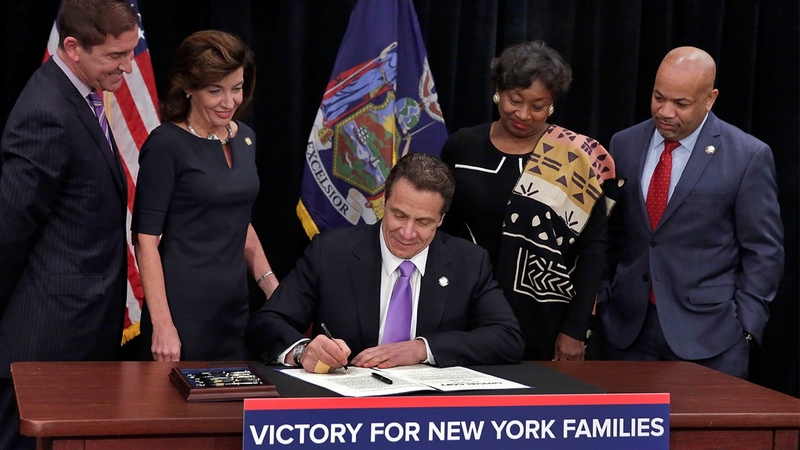 Accompanied on stage by Democratic presidential hopeful Hillary Clinton, Cuomo told a crowd of hundreds of cheering union workers after the bill signing that his father was "looking down on us today" and smiling.

"He is proud of the example that his state has set to the people of this country," he told a cheering crowd of maintenance, health care, transit, hotel and construction workers.

The elder Cuomo, a liberal Democrat and skilled orator, served three terms as New York's governor. He died on New Year's Day in 2015.

His son named the lobby effort to persuade lawmakers to pass the legislation after his father. The bill also establishes 12 weeks of paid family leave for workers.

The law gradually raises the minimum wage to $15 in New York City by the end of 2018 and in some prosperous suburbs by the end of 2021. But it will only rise to $12.50 in the rest of the state by 2020, with further increases tied to economic indicators. In all, about 2.3 million workers are expected to benefit from the increases.

Also Monday, California's governor signed a bill into law that will raise the statewide minimum wage to $15 an hour by 2022.

Clinton, who did not attend the bill signing, told the crowd it was time to "go all the way to Washington and raise the minimum wage for everybody."

But some workers at the Manhattan rally said they wished Clinton, who has backed federal legislation that would create a $12-per-hour minimum wage, would explicitly endorse the push for a nationwide $15 minimum wage.

"We're serial activists," she said. "We know how to push to get what we want."