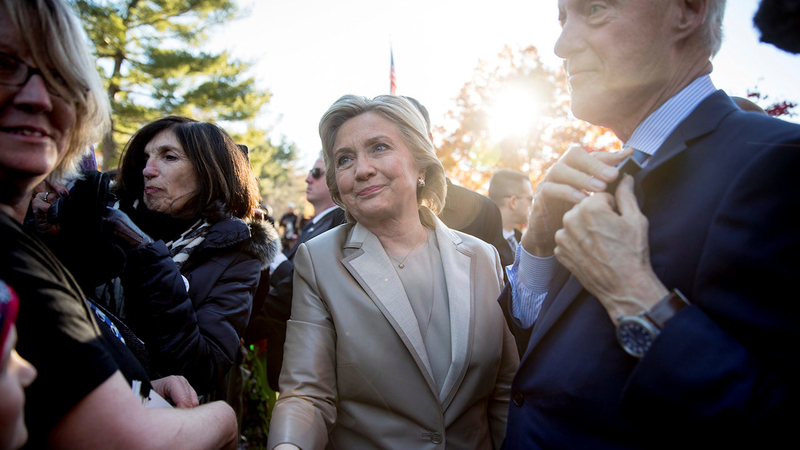 "They're still counting votes and every vote should count," he told an emotional crowd lingering at Clinton's election night event. "Everybody should head home you should get some sleep we'll have more to say tomorrow."

She is expected to make a statement Wednesday morning.

Thousands of Clinton supporters who gathered outside the intended site of her election night party stared quietly at their smartphones. Some cried as they filtered out of the convention center.

By the time Podesta spoke in the early hours of Wednesday morning, only about 150 Clinton supporters were left in the huge outdoor pens that once held thousands of people expecting to see the first woman elected president. Custodians began sweeping up.

"My disappointment makes me not trust the rest of the world," said Katie Fahey, who had flown to New York from Grand Rapids, Michigan, wearing a red pantsuit, expecting a victory party.

As the night wore on, the shape of the contest was startling to Clinton and her aides, who ended their campaign exuding confidence. Many stopped returning calls and text messages as the votes were tallied. Clinton, her family and close aides were hunkered down to watch returns at a Manhattan hotel suite.

"I'm terrified," said Niki Rarig, 34, who traveled to New York City from Portland, Oregon, for what they thought would be a victory celebration. "I just can't even imagine what a Trump presidency would look like."

Democrats have carried Michigan in every presidential election since 1992, and Clinton made two stops there in the final days of the campaign to shore up support, but she never made a stop in Wisconsin after the primary there last spring, confident of a victory there. Trump's victory in Wisconsin put him over the top.

Earlier in the day, Clinton voted at an elementary school near her suburban New York home with her husband, ex- President Bill Clinton.

Clinton's campaign had picked a symbolic location for her election night party - the Jacob K. Javits Convention Center in New York City, which, in a nod to the historic moment, offers a glass ceiling.

A number of New York politicians and top campaign surrogates spoke to the thousands of Clinton supporters.

Her dark Election Day was a stark contrast from Clinton's confident final days on the campaign trail. The former secretary of state and New York senator dashed through battleground states, encouraged get-out-the-vote efforts and campaigned with a star-studded cast of celebrities, President Barack Obama and first lady Michelle Obama.

After the divisive rhetoric of the campaign against Trump, Clinton sought to offer a positive closing message on Monday. She told supporters in Pittsburgh they "can vote for a hopeful, inclusive, bighearted America."

Some good news boosted Clinton's spirits in the final moments of the campaign. On Sunday, FBI Director James Comey sent a letter to Congress, informing lawmakers the bureau had found no evidence in its hurried review of newly discovered emails to warrant criminal charges against Clinton.

The late October announcement of a fresh email review rocked the race just as Clinton appeared to be pulling away from Trump in several battleground states. The update from the FBI may have come too late, in the nine days between Comey's initial statement until his "all clear" announcement on Sunday, nearly 24 million people cast early ballots.