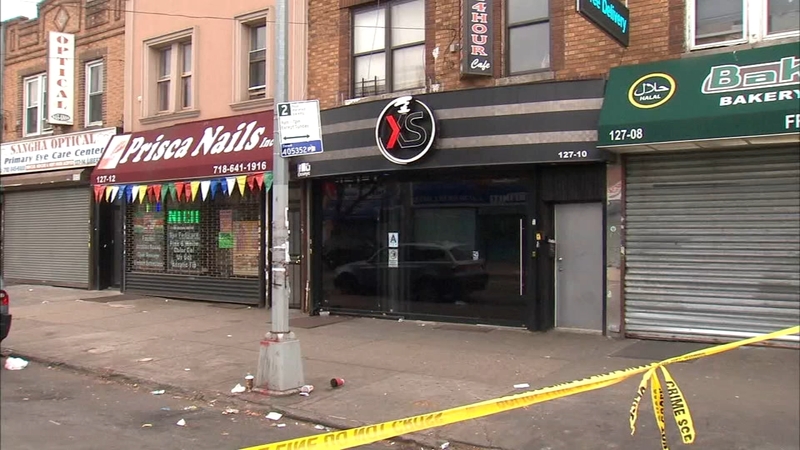 RICHMOND HILL, Queens (WABC) -- Police say a man angry over a parking dispute stabbed two people and then struck a group of others with his car in Queens early Sunday.

According to the NYPD, the dispute involving two vehicles began at about 4:30 a.m. in front of a hookah bar on Liberty Avenue in Richmond Hill.

The driver of a white Hyundai sedan exited the vehicle and stabbed two men inside a BMW in the torso.

After a crowd of people argued with the driver of the white car, he drove up the sidewalk where they had begun walking away and struck six of them.

Richardo Chatergoon, 23, from Far Rockaway was killed, and five others were injured.

#update 23 yr old Richardo Chatergoon was hit and killed in #Queens #nypd says this all stated over a parking dispute. More starting at 5 @ABC7NY pic.twitter.com/4VxUKSR4DX

Among the injured was one of the men in the BMW who had previously been stabbed. The 29-year-old is in critical condition.

All the victims were taken to Jamaica Hospital.
The 22-year-old driver of the white car later walked into the hospital with a cut to the hand, and the injured already there identified him as the suspect.

He is now in police custody. The car was found parked near the hospital.

Investigators are reviewing video that may have captured the incident.

An argument over a parking spot, leaves one man dead, 6 hurt and suspect in custody. #nypd says suspect drove his car, 1st one seen here, into a crowd. More soon #queens @ABC7NY pic.twitter.com/LeIKxr8z8D

There is no known nexus to terrorism, according to the NYPD.