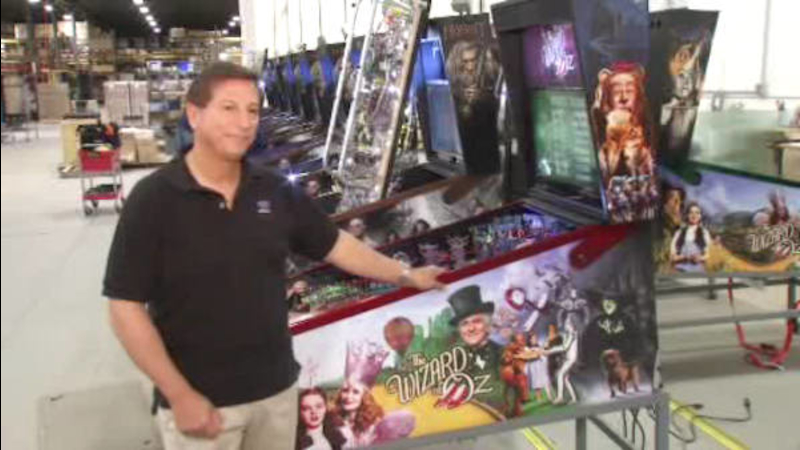 LAKEWOOD, NJ (WABC) -- You may find yourself going to an arcade to enjoy some family fun playing pinball this summer, and it turns out that there are only very few companies who produce the machines. And one of them is in New Jersey.

"A pinball machine is a mechanical device that just makes everybody smile," said Jack Guarnieri, of Jersey Jack Pinball.

Guarniere, better known as Jersey Jack, has sold pinball machines for decades. But now, he also makes them.

Located in Lakewood, Jersey Jack is one of only two major companies making the machines in America. He started his company in 2011 and began taking orders for his first machine, "The Wizard of Oz," which features all the characters from the story and is more experimental than the old-school pinball games.

"We're taking you on a journey where you get immersed in a game," he said. "And it's a lot of fun."

The game offers an LCD screen and plenty of images, things that Jack sees as appealing to the newer players.

"Today, you see a kid in a stroller with an iPad," he said. "So I knew I couldn't build a pinball machine the old way."

Jersey Jack employs 60 people and uses materials from as many local and American companies as possible.

At $9,000 a machine, he knows he's tapping into a pinball passion out there.

"We want to be a $100 million company," he said. "I can see us building and selling 10,000 games a year."
Related topics:
hobbies & interestslakewoodsummergamesboardwalk
Copyright © 2021 WABC-TV. All Rights Reserved.
More Videos
From CNN Newsource affiliates
TOP STORIES