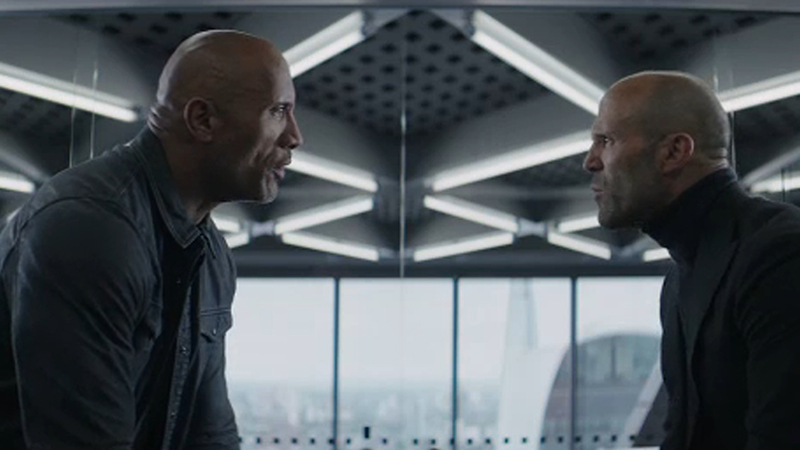 NEW YORK (WABC) -- If you Google the phrase "over the top," don't be surprised if "Hobbs & Shaw" comes up. If you're one of those folks who watch a movie and say, "This could never happen" -- then "Hobbs & Shaw" is definitely not the movie for you!

The "Fast and Furious" action could only be created in a computer, and audiences have to be willing to suspend disbelief to just go along for the ride.

Opposites repel rather than attract in the case of the two operatives played by Dwayne "The Rock" Johnson and Jason Statham. The two have to work together to neutralize a deadly virus that is inside Shaw's sister. She is played by Vanessa Kirby, last seen playing royalty on TV in "The Crown."

She holds her own against two big movie stars, but the stand-out here is, Idris Elba, as a genetically enhanced villain who really, really wants to get his hands on the virus. The movie is worth watching just to see what he can do with a little help from advanced technology, which makes him bulletproof and superhuman.

The plot holes are big enough to drive a truck through, and the movie descends into parody. As the Brits like to say, "Hobbs & Shaw' aren't bad fun.

I had a lot more fun watching these two than suffering through "Once Upon a Time in Hollywood," proving again that sometimes an action movie is a better bet than a film with artistic pretensions -- especially in the summertime!