Hoboken Mayor Dawn Zimmer: Water issues may not be resolved until 'after Thanksgiving' HOBOKEN, N.J. (WABC) -- Jackson Street is still flooded and water issues may persist until after the Thanksgiving holiday following a water main break over the weekend in Hoboken.

SUEZ Water crews continue their efforts to repair a huge water main break that caused flooding in parts of the city and has led to street closures. The repair is much more complicated than originally thought.

They are fixing both the water main that broke Sunday morning and a 36-inch valve that failed Sunday night, disrupting a transmission main that feeds water from Jersey City into Hoboken. Repairs to replace the valve are still underway.

Residents have been told to boil any water that will be consumed for at least one minute. Water doesn't have to be boiled for showering or washing dishes or clothes.

Numerous water tankers have been deployed so residents can get clean drinking water. Until the system is fully repaired, trucks will continue to dispense free water in town, as long as you bring your own containers.

Hoboken officials are asking drivers to avoid the southern part of the city, and a boil water advisory remains in effect after the break that disrupted water service for residents. Residents are also asked to conserve water as much as possible.

Several streets will remain closed until further notice, and Hoboken Police Chief Ken Ferrante urges those traveling to or from Hoboken to use public transportation.

Boil water alert still in Hoboken and all Hudson county residents being told to conserve H2O until main is fixed. pic.twitter.com/GDwolPswP4

The high water in the streets created a traffic nightmare throughout the city. One motorist went around a barricade, and found out the street had caved in, swallowing his vehicle. 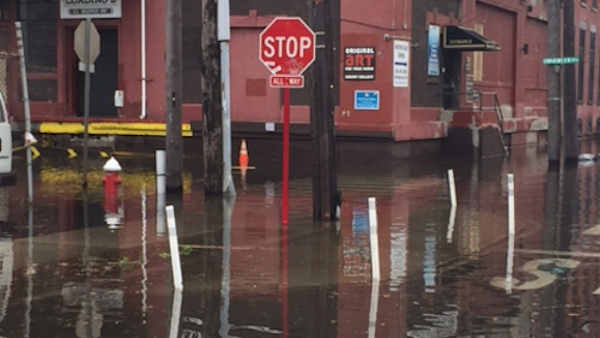