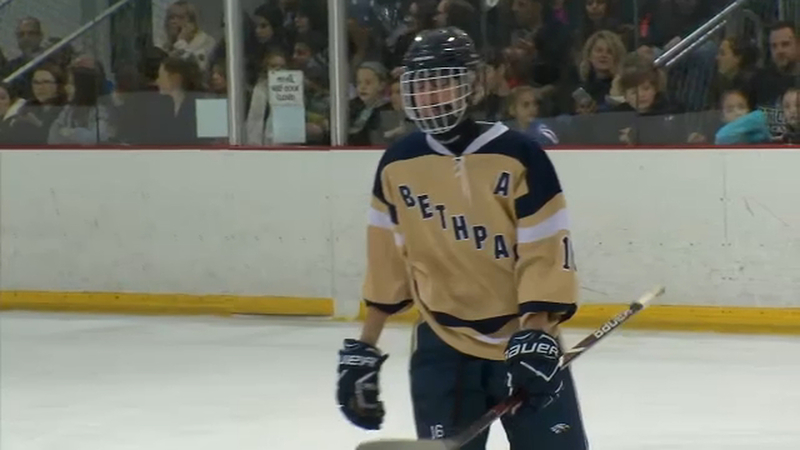 And then, right before the game, the teen got the OK to play.

With the level of energy on the ice and the excitement in the stands, you would think it could have been an NHL playoff game.

But the enthusiasm on the Town of Oyster Bay Ice Rink was all for Number 16, Derek Zacchino.

When he gets knocked down, he picks himself up, and his team definitely has his back.

In fact the entire arena was there for him, even the opposing team.

The teen hasn't played since last season. He wasn't even supposed to be on the ice Wednesday night.

But in a surprise for the audience, his doctor cleared him to play.
"Words really can't describe this," said Derek. "I came out and I was shocked. To say the least."

Derek has terminal brain cancer. So the Bethpage High School hockey team organized this benefit game and raised more than $16,000 in his name for pediatric cancer at Cohen's Children's Hospital.

So for his mom and dad, the night was about hockey. "I worry about him every day," said Dawn Zacchino. "He's very smooth. He's got a long stick," said his dad Don Zacchino.

But sometimes a game can mean so much more.

"A little rusty. A little nervous beforehand but I'm just glad to feel back," said Derek.

"I stopped giving him advice once I realized he's smarter than me," said his father. "I'm just happy to be back and I'm glad they were here to watch it," Derek said.

By the way Bethpage, massive underdogs, beat undefeated Oceanside in the game.