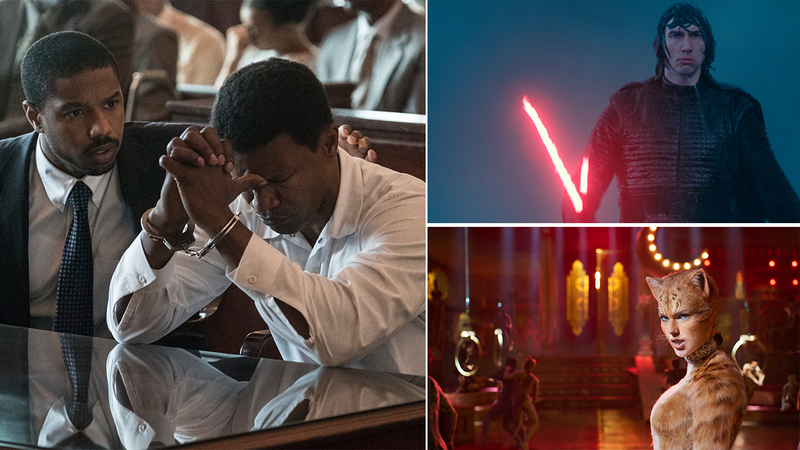 EMBED <>More Videos
NEW YORK (WABC) -- 'Tis the season to see some of the best or at least most anticipated movies of the year!

Filmed in what appears to be one continuous take, the movie set during World War I brings home the horror of "1917" in a thrilling way.

It's an action movie that makes you think long and hard about the futility of war, as a couple of soldiers work to deliver a crucial message: the Germans are luring British troops into a trap.

The decision to cast unknown actors as the leads and give those parts to young performers made the film seem more real to me.

"1917" may be about events that took place more than a century ago, but the innovative way it was made ensures its relevancy for the 21st Century.

This feels like a contemporary story instead of the umpteenth version of a tale from the 19th Century, and Saoirse Ronan leads a strong cast directed by Greta Gerwig, who adapted Louisa May Alcott's timeless story of four sisters.

Laura Dern plays their mom and Timothee Chalamet their friend, in supporting roles that complement the central character of Jo, who except for her period costume could be a young woman of today.

It's a mystery to me how Gerwig managed to make such a compelling movie out of such familiar material. Dynamic, entertaining, emotional, captivating, "Little Women" is all that and more.

It's a tribute to Will Smith's celebrity and the force of his personality that just his voice and a caricature of his famous face make "Spies in Disguise" worth seeing. This is even more remarkable considering his secret agent spends much of the movie disguised as a pigeon -- thanks to a potion developed by a young scientist voiced by Tom Holland.

This sort of spy spoof has been done before so often, but here the silly is mixed with the sweet -- and the result is a highly entertaining concoction that's in keeping with the joy of the season, and it's also a change of pace from much more serious films in theaters now.

CLICK HERE for Sandy's full review of "Spies in Disguise"

Jamie Foxx has already been nominated for a SAG Award by his peers in the Screen Actors Guild thanks to his role as Alabama prison inmate Walter McMillian, who is condemned to die for a crime he did not commit.

Michael B. Jordan stars as civil rights lawyer Bryan Stevenson committed to getting his client set free, while Brie Larson plays his colleague and co-founder of The Equal Justice Initiative in the film, which is based on a true story.

The film brings home the scourge of racism like nothing else I saw this year, and it left me oscillating between deep sadness and fierce rage -- my emotions deepened by the power of the performances, which are uniformly excellent.

The death penalty has always been a hotly debated topic in the United States, and it is now the focus of a new film that shows capital punishment in graphic detail.

"Clemency" brought home the debate in a visceral way, and watching a prisoner die by lethal injection is the single most harrowing experience I had at the movies last year -- and "Clemency" asks us to go through it twice.

This movie forces you to confront the death penalty and wrestle with the issue rather than just think about it. For that, I am grateful -- although this movie's pace is too slow for me to fully recommend "Clemency."

Star Wars: The Rise of Skywalker

The true meaning of the title, "The Rise of Skywalker," only becomes apparent in the final minutes, and that's just one reason I found the movie so satisfying.

It's been said, "Time spent with cats is never wasted," but this new movie proves an unfortunate exception to that rule, because rarely has so much talent been squandered so completely.

"Cats" remains a one hit wonder: a long musical with just this one truly memorable tune, and it comes deep in a deadly dull first hour that reminded me the original Broadway show has almost no plot.

Click here to see the full review of "Cats"

Jumanji: The Next Level

New cast members Danny DeVito and Danny Glover join a familiar group of friends who follow one of their pals into an ancient video game.

Click here for the full review of Jumanji: The Next Level

Richard Jewell was hailed as a hero when he discovered a bomb during the Atlanta Olympics, but he soon found himself accused of the crime -- the victim of a rush to judgment by the FBI and the local media.

Click here for the full review of "Richard Jewell"

"'Bombshell" is a film based on a real-life scandal at Fox News.

Adam Sandler as the actor takes on a more serious role that is so truthful that it's hard to watch at times and made me forget all of the idiotic comedies Sandler has ever made.

Click here for the full review of "Uncut Gems"

Click here for the full review of "The Aeronauts"

The highly anticipated follow up to Disney's record-breaking smash hit "Frozen" hits theaters this weekend, and rarely are expectations so high for a sequel that it seems impossible for those who created the original to top themselves.

Click here to read the full review of "Frozen 2"

A Beautiful Day in the Neighborhood

A new film starring Tom Hanks and chronicling the life of Fred Rogers hits theaters this weekend, and "A Beautiful Day in the Neighborhood" is highly anticipated for those searching for a sense of nostalgia.

Half a century ago, Ford, an American corporation, wanted to buy the iconic Italian company Ferrari -- but founder Enzo Ferrari refused, and that set up a grudge match in France at Le Mans in an era when Ferrari dominated the famous endurance race.

But this movie is not just for gearheads like me because it touches on universal themes like the need for strong individuals in a society dominated by large corporations. The picture broadens out even further to be about the pursuit of perfection and the cost of that quest.