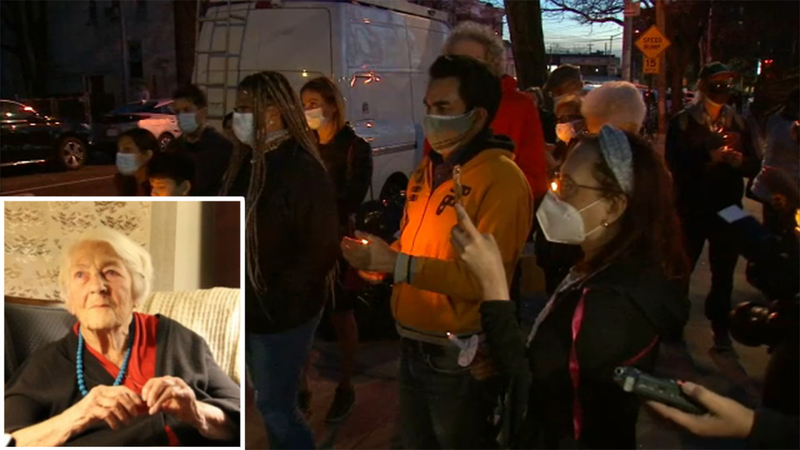 ELMHUSRT, Queens (WABC) -- On this Holocaust Remembrance Day, a community in Queens is hoping to landmark a home owned by a woman who fought for the Polish resistance during World War II.

Across the street from Veterans Grove Playground in Elmhurst, Queens sits 8828 43rd Avenue.

It's a modest little home in a quintessential Queens neighborhood.

It has a broken fence and crooked lamp and has sat vacant now for a year.

You probably wouldn't look twice at it as you walked by it, but the story of this home isn't about the four walls and its shoddy roof.

Michelle Charlesworth has more from the family of a Holocaust survivor as they push for more education in schools.

It's about who lived inside and how she lived her life.

"The house behind me was owned and lived in by Mrs. Walentyna Janta who during World War II, fought for the Polish resistance and helped uncover the Nazi atrocities at the Warsaw Ghetto," community activist Alfonso Quiroz said.

So, on this Holocaust Remembrance Day, community activists are remembering the 107-year-old Queens resident, who passed away last April, hoping to preserve her legacy by preserving the home and getting the city to landmark it.

"Resistance is not only with guns. Resistance is with the spirit and the soul. It is with love and it is with hope," said Rabbi Eli Blokh of Chabad of Rego Park.


Janta exposed Nazi atrocities in occupied Poland by translating documents into English for the Allies from the Polish Underground, and then her resistance continued right here in Queens.

"Mrs. Janta when she finally moved here, her and her husband basically set up an area in this home where Polish people would come and stay with them," Quiroz said. "And they were really Polish poets and singers and actors and politicians. Very very important people from Poland would often come here. And this was really the center of Polish culture in New York City for many many many years."

"Heroes are the people who make the right choices while everybody around them is making the wrong choices," Blokh said.

The Landmarks Preservation Commission is reviewing the request.

In the meantime, Janta's legacy is being preserved by the people who refuse to forget her story.

"He was a young kid, a hardworking guy." A Georgia man received quite the surprise while he was at a local jeweler working out a possible payment plan for an engagement ring, as none other than Shaq overheard the conversation.