WABC
By Nina Pineda
CANARSIE, Brooklyn (WABC) -- Residents in one Brooklyn apartment building were frustrated that the mailbox lock in their building was not getting fixed, until 7 On Your Side stepped in to help.

"Something here is not connecting," resident Glasena Jones said. "It can't close all the way."

A broken latch that locks 35 mailboxes for tenants at the Breukelen Houses in Canarsie seemed like a simple fix, but the latch has been broken for more than two months.

August Gshe and her neighbors have had to walk several blocks to the Post Office on Flatlands Avenue to pick up their mail.

"Very inconvenient," resident Torie Dickens said. "You can only pick up your mail Wednesday and Saturday, and you you're not getting the volume of mail."

Residents complain they're also not getting all their mail on pick up days, missing checks and getting hit with late fees.

"The bills get lost," Dickens said. "I'm missing statements. I have credit cards taken from me."

When 7 On Your Side visited the site, Dickens had just picked up her mail and found certified letter postmarked weeks earlier, back on September 6.The letter was a court notice with a long gone appearance date.

"I go there, and they say what happened, why didn't you show up for court," she said. "'We sent you a statement.' I have no statement."

And no mailboxes mean no slips to alert anyone about packages either. The residents said they feel they don't count, because despite claiming they called the New York City Housing Authority and the US Post office to fix the broken bank of boxes, they say they got no response.

She called us to complain, and we called the housing agency. NYCHA sent a repairman the very next morning, within 24 hours.

NYCHA's rep apologized to the residents, saying the mailbox was damaged due to "repeated incidents of vandalism over the past month."

The locks lock and the mail is in the box, and NYCHA vows to install a new tamper-proof mailbox bank later this week.

"I tell everyone if you have a problem, to call you," Jones said. "Thank you 7 On Your Side for helping us to get our mail delivered, as it's supposed to be."

"Not only do you get the problem fixed, you resolve it and make it go away," another resident said. "We all love you in this building."

NYCHA's FULL STATEMENT
"After repeated incidents of vandalism over the past month, staff are making temporary repairs this week to the mailbox door and will install a new tamper proof mailbox next week. We apologize for any inconvenience to our residents."

If using the app, click here to send us a news tip
Report a correction or typo
Related topics:
home & gardencanarsiebrooklynnew york citynychapost office7 on your sidepublic housing
Copyright © 2020 WABC-TV. All Rights Reserved.
7 ON YOUR SIDE 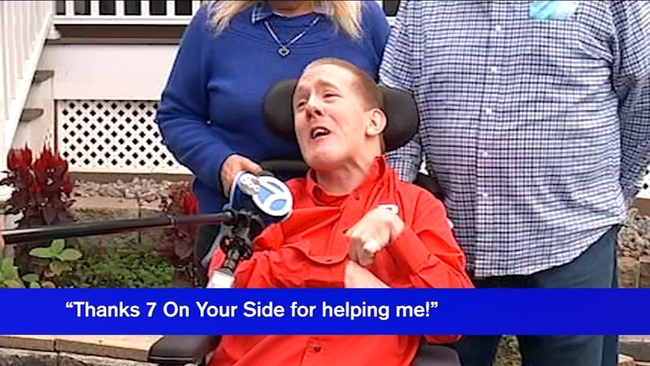 Volunteers bring light to hunger problem ahead of Diwali
Midtown stores already boarding up as Election Day nears
2 MTA workers rescue elderly man from subway tracks
Video: Dogs in 'candy coma' costume win Halloween 2020
Show More
The Countdown: Trump, Biden crisscross through Midwest
McRib lovers rejoice! Cult classic is coming back
War of the Worlds: When Martians 'invaded' New Jersey!
Sister of mother of 3 killed in alleged DWI crash calls for justice
COVID Updates: NJ tops 2,000 daily cases for 1st time since May
More TOP STORIES News
Send us your questions, issues, and story ideas to Nina by filling out the form above, by emailing 7OnYourSideNina@abc.com, or contact Nina on her Facebook page or tweet her at Twitter @7OnYourSideNY! You can also call the 7 On Your Side Hotline at 917-260-7697.