Bronx building with 250 apartments down to 1 working elevator 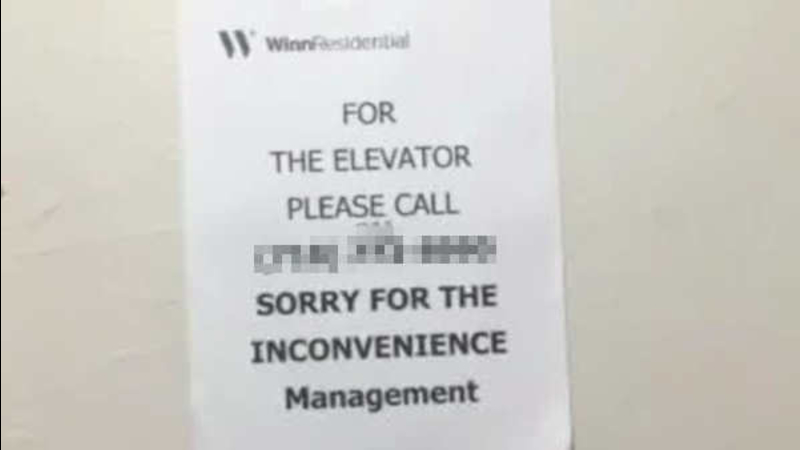 Bronx high-rise down to 1 working elevator

TREMONT, Bronx (WABC) -- Elevators are the lifelines for folks who live in a vertical city like New York, so when they don't work for months at a time, residents in apartment buildings suffer.

Now, one building in the Tremont section of the Bronx is showing just how bad a situation can get.

When Luke Johnson and his neighbors need to take the elevator in their building, it's not a simple push of a button. Instead, they have to call building security to come get them.

Residents at 2111 Southern Boulevard say for the last five months, the elevators have been breaking down. Currently, they're down to one in a building with nearly 250 apartments.

"The elevators is always broken, and old people be standing downstairs with their wheelchairs for hours and hours and hours," resident Teresa Cummings said. "It don't make no sense, one elevator when you have three elevators."

Building management declined to comment when Eyewitness News called for an explanation and to ask what they planned to do to remedy the problem.

"Look at how dark it is," one resident said. "You can get raped, mugged, everything."

Tenants say they're afraid to take the stairs. Tanya Collazo lives on the 31st floor and says its unreasonable for her constantly make the climb.

"I have chronic asthma," she said. "Sometimes I have to take the stairs because there be too many people waiting for the elevator. You get into arguments, because people want to get to their homes, especially when kids got to get to school and rush hour. Today I was waiting three hours to get the elevator."
Related topics:
home & gardennew york cityeast tremontelevator
Copyright © 2021 WABC-TV. All Rights Reserved.
TOP STORIES
Murder suspect arrested after exchanging gunfire with police in NYC
Woman arrested after dousing Yeshiva with gas, lighting it on fire
Over $13K raised for Gabby Petito Foundation during Sunday fundraiser
Nearly two-thirds of New Yorkers fully vaccinated against COVID
AccuWeather: Cool and gusty
Bill Clinton released from UCI Medical Center after blood infection
Video shows moments before, after killing of food delivery worker
Show More
Wake to be held for NJ woman allegedly killed by fleeing phone thief
5-year-old to donate money earned from pumpkin farming
SC teacher fired after student pulls weed gummies from prize box
COVID Update: FDA panel uncertain about mixing and matching vaccines
Evidence of water vapor found on 1 of Jupiter moons: NASA
More TOP STORIES News