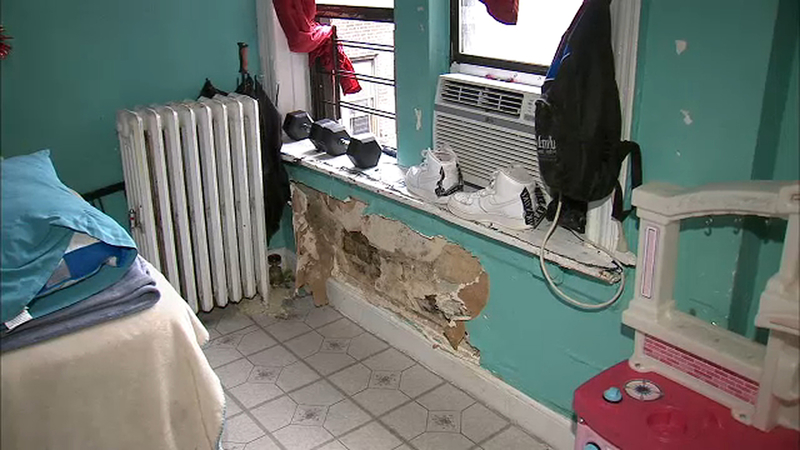 MOTT HAVEN, The Bronx (WABC) -- Tenants living in one Bronx building say the walls crumble, the ceilings leak and stoves have no gas -- and now their landlord is facing a lawsuit.

People have had to buy electric hot plates, eat takeout and shoulder other expenses they would not normally face.

Legal aid advocates say the conditions at 643 Southern Boulevard are dangerous for young and old tenants alike, and they're filing suit against Marquis Housing LLC.

If advocates succeed, a court-appointed administrator will collect the rent, and instead of profiting the landlord, rent money will go toward repairs.

"This landlord's course of conduct would appear to be a calculated effort to deny tenants their rights and force them to leave their homes," said Benjamin Seibel of The Legal Aid Society.

One of the biggest issues is the lack of gas for cooking. The entire building has been without cooking gas service since October 2017, and tenants said eating takeout is unhealthy and expensive.

"We represent people who are older and diabetic who need to be on a special diet. You just cannot feed a lot of people or easily cook on a hot plate," Seibel said.

Another problem is the lead paint chipping from the walls. Jessie said she's afraid her one-year-old son will put paint chips in his mouth.

"He comes here," she said. "Lead paint comes down, you know."

To make matters worse, ConEd just put up signs in the halls warning the power may soon be shut off because the landlord owes $12,000 in unpaid power bills.

Eyewitness News reached out to Marquis' attorney's office, which declined to comment.