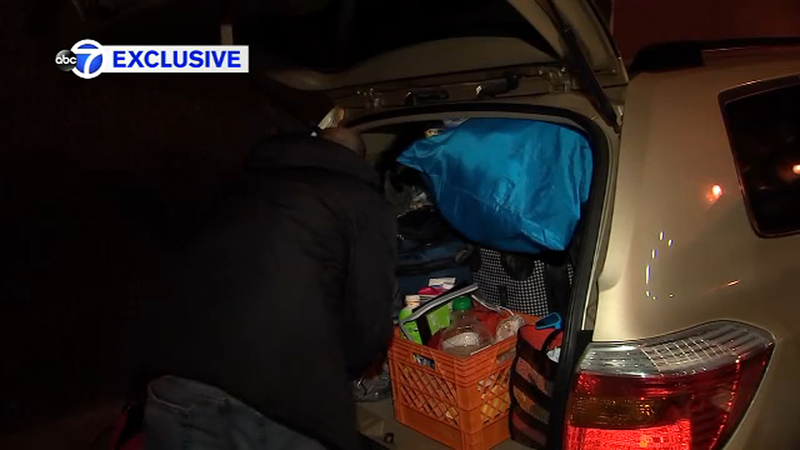 LONG ISLAND CITY, Queens (WABC) -- At a time of record homelessness in New York City, especially among homeless families, there is a controversy about a shelter in Queens.

A hotel in Long Island City is no longer taking in some homeless families.

Everything the Rieselman family has to their name, every last belonging, was stuffed in the back of an Uber Wednesday night.

And they're the lucky ones. They can afford the ride.

Dozens of families staying in city-rented rooms at the hotel suddenly got a letter, giving them a few hours to get out.

It is a family shelter where people stay while waiting for affordable housing vouchers. But for reasons not clear, the city is turning it into a facility just for single women. The kids have to go.

But why the rush in the middle of the night, on a school night when it was 20 degrees?

"They shouldn't have done this like this or at least waited till the weekend to get the children out comfortably," said resident Tiesha Jackson.

"This'll be the third time we had to move so we settle in the kids, find a school, we dig our claws in and the next thing you know you have an hour. They're knocking on the door telling you to leave," said resident Daniel Garcia.

Families were given new locations in other boroughs where they had to report Wednesday night. But the transportation promised in that letter never showed up until well after Eyewitness News called the city for answers.

Suddenly a bus which had been parked there before we arrived opened its doors and people finally started loading up. No answers, no apology, no way to live.

In a statement, the Department of Homeless Services said:
"We apologize for the miscommunication and want to clarify that no families will be turned out on the streets this evening. Families at this location were supposed to be transferred to other sites today, so we can use this location to meet immediate capacity needs, but we are in the process of making arrangements to accommodate these transfers tomorrow instead."
Report a correction or typo
Related topics:
societyqueenslong island citynew yorkshelterhomeless
Copyright © 2022 WABC-TV. All Rights Reserved.
TOP STORIES
3 people killed in crash near catering hall on Long Island
NJ police impose curfew after large party gets out of hand
Empire State Building lit to honor Notorious B.I.G.'s 50th birthday
AccuWeather Alert: Still steamy
Heat Advisory issued ahead of possible record-breaking temperatures
Suspect breaks into NYC apartment, stabs man to death
Fate of 2,500 Ukrainian POWs from steel plant stirs concern
Show More
Biden pushes economic, security aims as he ends South Korea visit
Man killed, woman injured in jet ski accident along Hudson River
Man dies after collapsing at finish line of Brooklyn Half Marathon
Teen sought in 11-year-old shooting death also wanted for 2 robberies
White Sox shortstop accuses Yankees' Donaldson of making racist remark
More TOP STORIES News