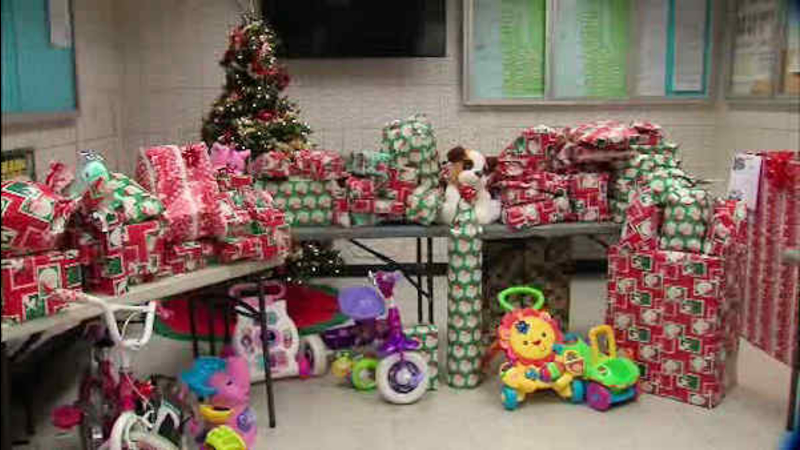 BROOKLYN (WABC) -- A New York City police officer who once lived in a homeless shelter is giving back, organizing holiday gifts for kids at a family shelter in Brooklyn.

Officer Carlos Ramos, who lived for at time at a Manhattan shelter when he was 10, spent the past week collecting presents for a toy drive he organized. And on Monday, he gave some of those toys out at the Flushing Family Shelter.

It is a meaningful endeavor for him, as he remembers exactly how it feels to be a homeless child at christmas time in new york.

"I will never forget that that feeling," he said. "The feeling of feeling, unloved, uncared, unwanted."

And so Ramos turned that pain into something positive. Officers he works with, churches and other private groups donated hundreds of gift in a drive begun by a man who knows what its like to go without.

"It's not easy being on the bottom," he said, choking up. "It's not easy seeing fathers with their children, and you don't have a father."

Ramos now has children of his own, but he still has room in his heart for kids in the place he lived just 20 years ago.

"I want to make a difference," he said. "I just don't want to be selfish."

Ramos said that when he was a child in the shelter and things seemed hopeless, especially around Christmas, someone gave him a basketball as a gift. And that, he said, made such a difference in his life and inspired the toy drive.