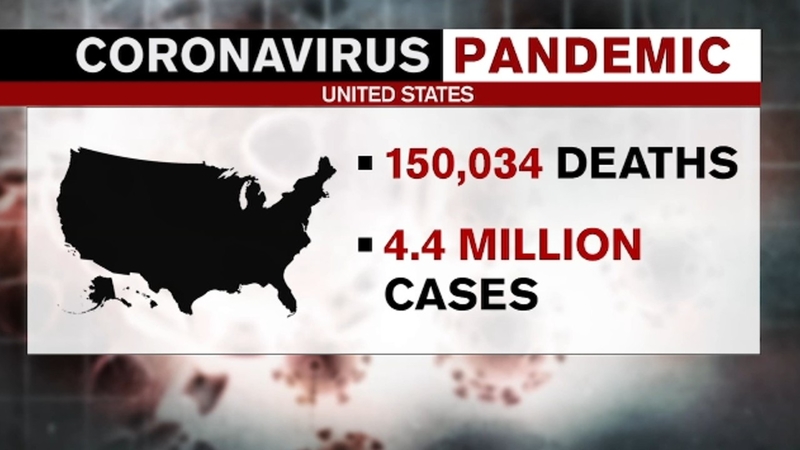 NEW YORK (WABC) -- The COVID-19 death toll in the United States officially climbed over 150,000 on Wednesday.

However, Mayor Bill de Blasio said the percentage of New York City residents testing positive for COVID-19 is holding steady at 2%, while many parts of the nation are seeing an increasing infection rate.

"It will impact the kids in this community and the families of these kids," Kriseman said.

DOG DIES OF COVID
A family from Staten Island described the last days of their dog, the first pet canine in the U.S. to test positive for COVID-19, in an exclusive interview with National Geographic.

The family says the most confusing part of it all was the fact that no one seemed interested in learning from Buddy's death or studying what role COVID-19 played in it, considering how few cases had been confirmed in animals.

REP. TESTS POSITIVE
Rep. Louie Gohmert, R-Texas, tested positive Wednesday for the coronavirus, forcing him to abruptly cancel his plan to travel to his home state with President Donald Trump aboard Air Force One, a House Republican aide said.

Gohmert, 66, one of the House's most conservative and outspoken members, tested positive at the White House and planned to isolate, according to the aide, who was not authorized to publicly discuss Gohmert's test result and spoke on condition of anonymity.

BACK IN ACTION
Movie and TV production resumes in the Big Apple. On a typical day before the pandemic hit, as many as 100 movies, TV shows, and commercials were in production at the same time across New York City.

"Over the past four months, we've crushed the curve," Murphy said. "We're now back to where we were roughly a month ago in the daily number of new cases. We cannot go backwards."

US SURPASSES 150,000 DEATHS
The death toll in the United States has now crossed 150,000 people and now stands at 150,034, according to Johns Hopkins University.

GIANTS PLAYER OPTS OUT OF SEASON
New York Giants left tackle Nate Solder, who started every game the previous two seasons, has opted out of the 2020 NFL season due to the COVID-19 pandemic, according to the team's website.

2ND DAY OF RECORD DEATHS IN FLORIDA
Officials in Florida reported a new high in deaths Tuesday after the health department announced an increase of 217 fatalities since Monday. The total number of deaths now stands at 6,457. Officials reported 9,446 new cases, bringing the total to 451,423. The positivity rate is at 12.26%. On Sunday, the state saw 191 deaths. Not all of these people died in the last 24 hours, officials say. Their deaths were reported to the health department in the last 24 hours.

MTA INSTALLING MASK DISPENSERS ON BUSES
The MTA announced Wednesday that it has launched a pilot program to mount dispensers of free surgical masks inside buses to further protect customers while on board. The agency has already completed the installation of dispensers on 100 buses on six bus routes in three boroughs, with the goal of rolling out the pilot across every borough on more than 20 routes and 400 buses by the end of August.

US OPEN GOLF IN NY
Governor Andrew Cuomo announced that the U.S. Open Golf Tournament would be held at Winged Foot Golf Club in Mamaroneck on September 17. He added that there would be no spectators.

SURVIVOR STORY
An 80-year-old woman is back home after a terrible fall broke many bones, but may have ended up saving her life. That tumble back in January broke her hip and femur, but it revealed a string of other life-threatening ailments that would have otherwise gone undetected.

MORE STATES ADDED TO TRI-STATE QUARANTINE LIST
New York Governor Andrew Cuomo said that the state is closely watching the infection rate across the country, which he called "very bad." As a result, Illinois, Kentucky, and Minnesota, along with Washington, DC, and Puerto Rico were added to the quarantine list.

OVERCROWDING CONCERNS AT HAMPTONS CONCERT
Governor Andrew Cuomo is lashing out after video showed a lack of social distancing at a Chainsmokers concert in the Hamptons. Now a health department investigation is underway. Video posted on social media shows massive crowds gathered in front of the stage with little space between one another.

HOW TO TREAT 'MASKNE'
It's a cosmetic casualty of the coronavirus pandemic: acne or irritation on the skin around one's face mask. It's a condition that's being called "maskne." Dermatologists are seeing more people come in who are experiencing the condition.