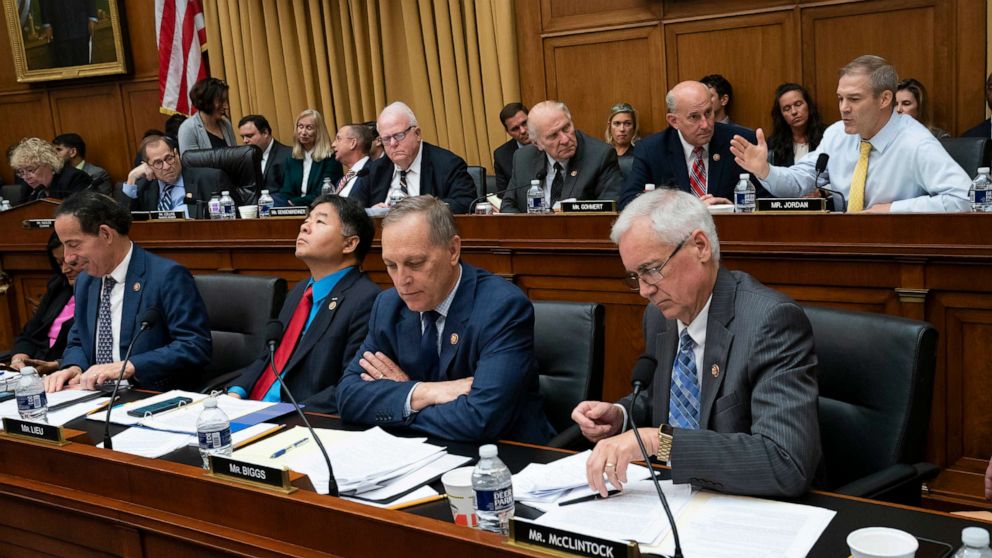 The House Judiciary Committee on Thursday voted along party lines to expand its impeachment investigation, representing a new urgency in the Democrats' probe into President Donald Trump.

Republicans, on the other hand, argued that the committee action was "like a Seinfeld hearing - it's a hearing about nothing," saying the panel should be focusing instead on questioning Justice Department Inspector General Michael Horowitz on his finding that fired FBI Director James Comey violated agency policy.

The committee vote comes as Democrats have struggled with their messaging on impeachment -- using different terms to explain what steps they are taking with regard to their investigation to determine whether to recommend articles of impeachment to the House.

"The Committee is engaged in an investigation that will allow us to determine whether to recommend articles of impeachment with respect to President Trump," chairman Jerry Nadler, D-N.Y., said. "Some call this process an impeachment inquiry. Some call it an impeachment investigation. There is no legal difference between these terms, and I no longer care to argue about the nomenclature."

Ranking Member Doug Collins compared the Democrats move to "a giant Instagram filter to make it appear that something is happening that is not."

"The ambiguity -- the confusion -- is a product of my colleagues' own making because there is an easy way to know exactly whether this committee is in impeachment proceedings: It's called a vote -- a vote of the full House of Representatives," Collins said.

The new procedures -- according to the committee -- would allow staff counsel to participate in questioning for one hour during hearings and would allow the president to respond in writing to evidence the committee gathered.

"Under these procedures, when we have finished these hearings and considered as much evidence we are able to gather, we will decide whether to refer articles of impeachment to the House floor," Nadler said.

At her weekly news conference on Thursday, House Speaker Nancy Pelosi refused to concede that Congress is in the midst of an impeachment investigation, insisting that its oversight of the administration is a basic prong of its constitutional responsibilities.

"I stand by what we have been doing all along. I support what is happening Judiciary Committee because that enables them to do their process of interrogation and in their investigation and I salute them for that work," Pelosi, D-Calif., said. "Impeachment is a very divisive measure. But if you have to go there will have to go there. But we can't go there unless we have the facts. And we will find the facts."

"That's the only question. That's all I have to say about this subject," Pelosi proclaimed. "And there's nothing different from one day to the next, we're still on our same path."
Report a correction or typo
Related topics:
abc newsnational
Copyright © 2020 ABC News Internet Ventures.
More Videos
From CNN Newsource affiliates
TOP STORIES