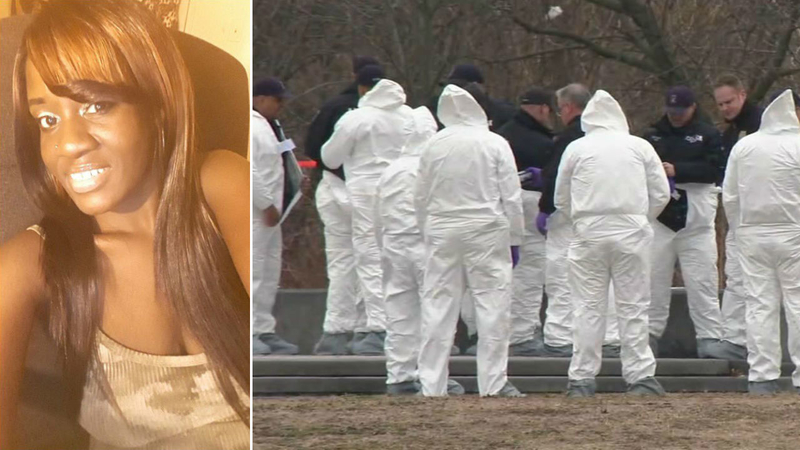 Mother of woman whose body was found in Brooklyn speaks out

CANARSIE, Brooklyn (WABC) -- The woman whose dismembered body was found in a Brooklyn park has been identified, as investigators try to determine how she died.

Police identified the deceased on Wednesday as 26-year-old Brandy Odom of Brooklyn. Her mother spoke exclusively with Eyewitness News.

"I can just imagine what kind of pain she probably could have been going through with such a vicious act," said Nicole Odom.

Nicole hasn't slept in two days since her daughter's body was found in Canarsie Park, less than a mile from a relative's apartment.

Her head and naked torso were found face-down among the leaves and twigs. Her arms and legs were later discovered several blocks away.

Late Wednesday morning, sources say a bloody saw was recovered from a trash can near the crime scene.

Police have not said how she was killed although investigators believe she was murdered elsewhere. Her remains were dumped in the park where they were found on Monday evening.

"Everybody loved her," said Nicole. "I can't even see how one person would want to do this to her. Brandy was friendly with everybody."

The saw was discovered in an area that had been searched the day before. DNA testing will be used to confirm a link to the crime and perhaps pinpoint a suspect.

A $2500 reward is being offered for information. Authorities have not said whether they believe the murder was a random crime, or whether Brandy Odom was killed by someone she knew.

"I just want to know the people that's out here to know that this was somebody's child and she do have people that loved and cared for her," said Nicole Odom.

Nicole Odom says she last saw her daughter about a month ago when Brandy had received mail notifying her she was granted an interview to become a school safety officer.

She says she was living with a roommate in Queens and didn't have any problems.

Nicole said she first learned of the crime while watching the news on television this week. She never suspected it could be Brandy until it was reported that the victim had a distinctive tattoo.

Stacey Sager has more on the gruesome discovery of a dismembered body in a Brooklyn park.

The medical examiner will determine Odom's cause of death.

"I don't know who it is," resident Maryann Markovics said. "I think they dumped her. I can't believe that it happened here...I feel bad."