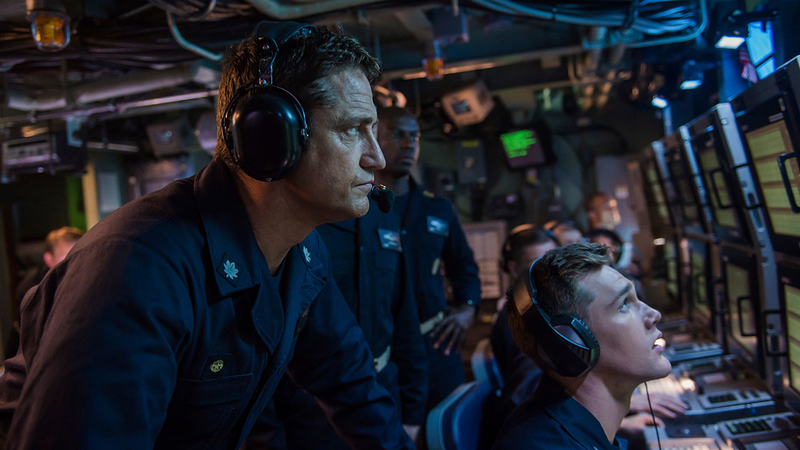 NEW YORK (WABC) -- "Hunter Killer" is yesterday's movie here today: a throwback to the kind of action-adventure story Hollywood liked to tell back when the U.S. was in The Cold War with the Soviet Union.

Gerard Butler spent more than half a dozen years trying to get "Hunter Killer" made, and it is a worthy showcase for his talents -- which is not the same as saying it's worth your time and money.

The movie falls somewhere between an ego trip and an exciting adventure. Butler's character rose through ranks to command a submarine. It's placed in harm's way near the coast of Russia where a Russian sub has been sunk, and a government minister is looking to start World War III by blaming the U.S. for what happened.

Back home, an admiral, played by rapper-turned-actor Common, keeps a cooler head while those around him are losing theirs. It's good to see him go toe-to-toe with Gary Oldman. Common bests the veteran because Oldman is just too over the top.

Turns out, this is all part of a coup, and the madman is holding the president of his own country hostage.

The twist here is that the Americans must save the Russian chief executive to avert disaster, and that leads Butler and crew deep into a submarine base guarded with mines and motion sensors.

I was on the edge of my seat for that one, but the action has a retro feel, and there are plenty of older movies plumbing the same depths that are better than "Hunter Killer."

I can think of newer TV shows that are better bets for a rainy day. The movie held my interest, but I saw it for free.

Would I pay to watch the picture? Nope.