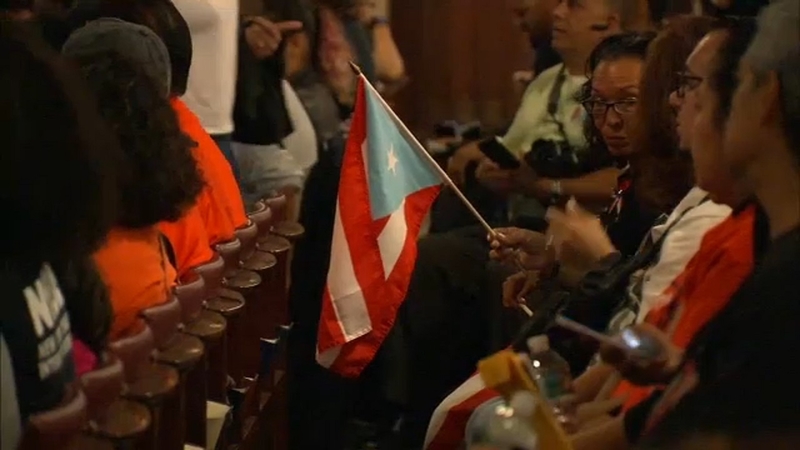 NEW YORK (WABC) -- On the one-year anniversary of Hurricane Maria's landfall in Puerto Rico, New York City leaders are calling for continued support of the storm-ravaged island while sending a letter to President Donald Trump demanding an independent commission investigate the federal response to the disaster.

The death toll, power outages and extensive damage have left an indelible mark on the island, and as the recovery continues, local leaders are demanding more transparency into the federal response.

On Thursday, City Council Speaker Corey Johnson and 40 council members sent a letter to the president urging him to establish an independent, bipartisan commission to fully investigate the response and recovery efforts in the aftermath of the hurricane. The letter highlights what the authors call a double standard from the Trump Administration when comparing the response to Hurricane Maria with the response to Hurricane Harvey in Texas.

In one example cited in the letter, the council members pointed out that after Harvey struck, 73 helicopters had been deployed to Texas within six days, while it took three weeks for a similar response in Puerto Rico. The council also asked why the Federal Emergency Management Agency (FEMA) provided 5.1 million meals in the first nine days of Harvey, while the federal agency had only distributed 1.6 million meals in Puerto Rico in the same period of time.

Many parts of the island are still without power, and many residents are still living in the U.S. mainland after fleeing the aftermath of the storm. Many of the displaced storm victims are now living in New York City and several local communities.

Mayor Bill de Blasio called on the White House to continue assisting the people of the struggling island and promised that New York City is committed to providing shelter and other social services to those who were forced to leave. Right now, 543 people are in shelters, and evacuees are desperately trying to rebuild their lives.

"The response to Puerto Rico has to be seen for not only the failure that it was, but for the racist failure it was," de Blasio said. "This idea...reminds me of what other nations went through when they had truth and reconciliation commissions, when they looked at their hard truths, and they realized the only way to move forward was to openly acknowledge their mistakes and their biases and we need to do the same in this country."

The gathering comes as the controversy grows over the number of people who died in Puerto Rico as a result of the storm. President Trump has disputed the death toll of nearly 3,000 people, which has turned the issue into a political showdown -- with many feeling the island is been left in the dark with a slow recovery.

"Puerto Rico was struck twice by tragedy," Johnson said. "First, by the natural disaster, and then by a man-made disaster due to the poor and inadequate response and recovery efforts by the Trump Administration...Simply put, the federal government failed our fellow Americans, and neglected Puerto Rico."

Those who stayed and suffered in the storm are still working to get back to normal while keeping their focus on the restoration and cleanup.

A march was held Thursday from St. Bartholomew's Church to Trump Tower to remember the victims of Hurricane Maria and call for a recommitment to recovery.

CeFaan Kim spoke with a family who fled Puerto Rico when Hurricane Maria hit the island.