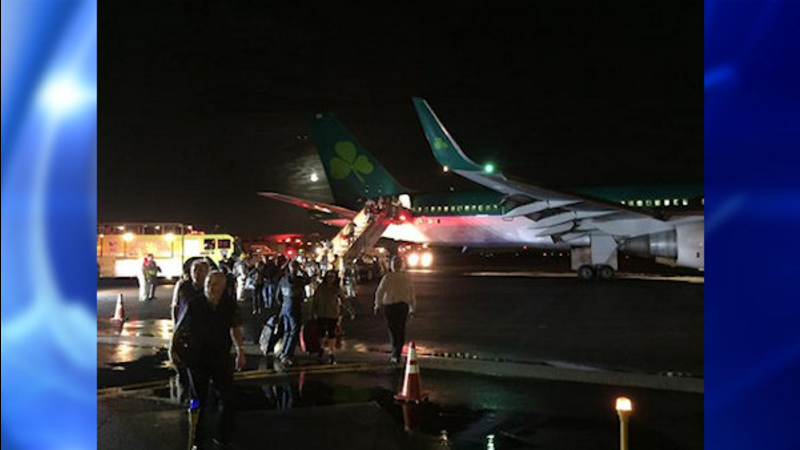 NEW YORK (WABC) -- An Aer Lingus flight out of Kennedy Airport to Ireland had to return to New York after a problem with its hydraulics systems.

A Port Authority spokesman says nobody was hurt in the incident but the plane had landing gear issues and no flaps as it came in to land yesterday evening.

"We do have a technical issue here - we lost our hydraulic system, one hydraulic system so we are going to have to return to Kennedy at some stage, not quite yet. I would like you to inform Kennedy that we have lost hydrolic fluid and it may be dumped on the runway we're not sure. Please stand-by for further," the pilot told Air Traffic Control.

The plane came in faster than normal and landed runway 22 left. 104 passengers were on board the plane.

ARFF trucks were on the scene as the brakes overheated and there was a smoke condition in the landing gear compartment. There was a fire to the left rear brakes that has since been extinguished by aircraft rescue and firefighters.

Eyewitness News spoke to one passenger by phone who told us how surreal the landing was and how calm and excellent the pilot was through it all.

"It just looked like a sci-fi movie. The actual touchdown itself was pretty bumpy, but not out of control considering, he did an excellent job. Right away we could see there were maybe 15 or 20 fire trucks right on the runway immediately, ready to drive up, and they started spraying us like almost immediately," said Patrick Dyer Wolf, a passenger. "And while they were still spraying the plane, the pilot came out into the cabin and made another announcement and explained what happened. He said that one of the hydraulic tanks had been leaking hydraulic fluid, and it started as a slow leak and then eventually drained to empty."

The passenger told Eyewitness News the pilot said they had practiced such a maneuver in simulators, but this was the first time in real life.