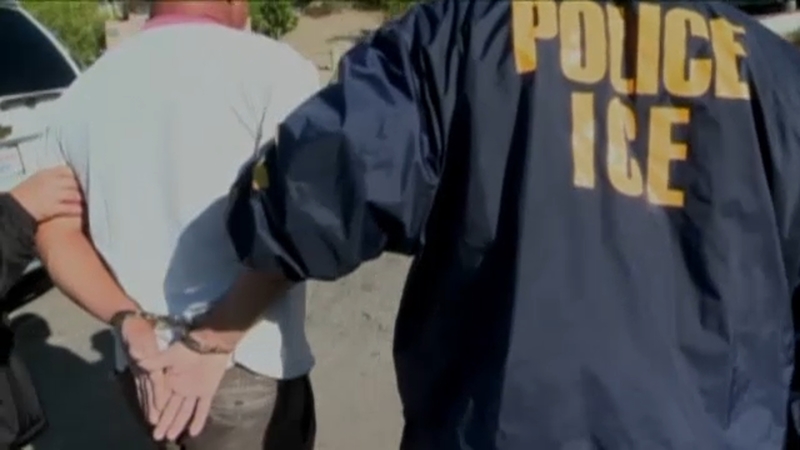 NEWARK, New Jersey (WABC) -- Immigration and Customs Enforcement may no longer deputize local police officers in New Jersey under a directive announced Friday by Attorney General Gurbir Grewal, who said he wants all immigrants to see a "clear bright line" between ICE and local cops.

"They can come forward to local cops, to state troopers, to county law enforcement and report crimes, regardless of their immigration status, and not fear being put into deportation proceedings," Grewal said during a news conference in Newark.

The announcement followed the recent round up of 54 immigrants who had been previously released from New Jersey jails before federal agents could pick them up.

These agreements are still in effect in Monmouth and Cape May counties' sheriff's departments.

RELATED: What to do if ICE agents show up at your door

Critics of New Jersey's directive say it makes it easier for violent criminals to be released from custody before they can be handed over to immigration authorities. Monmouth County Sheriff Shaun Golden called it "disappointing" and called agreements with federal authorities a "highly successful program."

The Cape May Sheriff's Office could not be immediately reached for comment.

Additionally, politicians in two more counties -- Ocean and Sussex -- have taken legal action against the attorney general for a directive they consider unconstitutional.

"These vital operations clearly show who ICE targets in an effort to protect the nation, while seeking to remove criminal aliens who pose a clear threat to public safety," said Ruben Perez, acting Field Office Director for ICE Enforcement and Removal Operations Newark in announcing the arrests.

The Trump administration considers New Jersey a sanctuary state for not automatically holding immigrants facing deportation in local jails until federal agents pick them up. The state wants the federal agents go to court and get a judge to agree a prisoner should be held for immigration agents.

"To be clear, nothing in the directive provides 'sanctuary' to dangerous criminals," Grewal said. "If you break the law, you go to jail, regardless of your immigration status."

Grewal said his new directive allows county jails to identify the most violent and serious offenders and notify federal authorities so they can be referred to federal agents.

"There is no reason that, under the directive, these dangerous offenders ever have to be released back into the community," Grewal said.

Under 287(g), created during the Clinton administration but grown under Trump, local police and corrections officers can serve as agents of the federal government and detain people for immigration-related offenses.