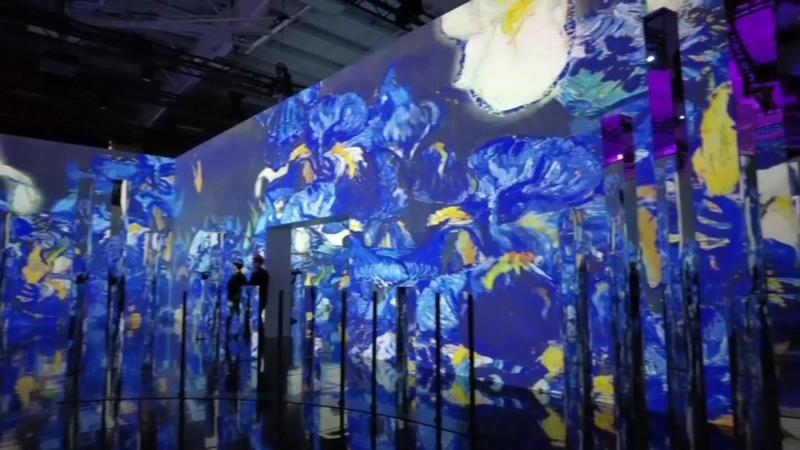 The exhibit, which is currently in previews, is located at Pier 36 NYC, a 75,000 square foot waterfront space located in Manhattan's Lower East Side with spectacular views of the East River and the Manhattan and Williamsburg bridges.

"I am thrilled to be collaborating with the creative minds behind the 'Immersive Van Gogh' exhibit to create a truly unique experience for the city of New York to enjoy and be inspired by," Korins said. "I have always been deeply moved when looking at van Gogh's paintings, which are universally beloved for their color and unique use of texture, or his transcendent ink drawings, and I'm humbled by the opportunity to develop an experience that will enhance the viewers' time spent with his powerful art."

"Immersive Van Gogh" invites audiences to step inside the iconic works of the post-Impressionist artist, evoking his highly emotional and chaotic inner consciousness through art, light, music, movement and imagination.

"You stand inside van Gogh's masterworks, broken down piece by piece, element by element, over 40 paintings broken down and set to music," Korins said. "The experience is omnidirectional and multisensiral."

The gallery space offers patrons more than 500,000 cubic feet of animated projections, with Korins creating a custom design to fit the architecture of the exhibition's New York home, adding elements to the gallery space as well as adjacent auxiliary elements.

"They called me up and said we want this to be three times bigger, three times deeper, and three times wider than ever before," Korins said.

The exhibit wraps up Sept. 6 and will open in other cities around the country, but Korins said he hopes to keep some elements in the city on a smaller scale.

"I learned he had chromesthesia, which is a form of synesthesia, he heard color and saw sound," Korins said. "His work is perfect art, perfect time for the moment."

"'Immersive Van Gogh' has been hailed as an entirely new way of encountering art and has been enthusiastically embraced by press and patrons in every city in which it currently is being presented," producer Corey Ross said. "Our New York exhibition will be by far our most ambitious. Not only do we have the talents of our ingenious Italian creative team, we also have David Korins bringing his distinct creative vision to the project to provide an unsurpassed guest experience."

ALSO READ | Charges to be filed after woman feeds spider monkeys, zoo says
Since its North American premiere in July 2020, more than 1 million tickets have been sold to Immersive Van Gogh.

The hour-long walk-through installation has been designed with health and safety as a priority. Admissions will be limited according to New York City's capacity guidelines with touchless ticket taking, temperature checks upon arrival, hand sanitizer stations and social distancing markers prominent throughout the venue, and digitally projected social distancing circles on the gallery floors to ensure appropriate spacing.

All guests must wear a face covering at all times.

Tickets range in price from $29.99 for kids to $99.99 for VIP Flex tickets, which comes with priority access, flexible admission, a limited-edition poster, a souvenir laminate and a van Gogh cushion.

For more information and for tickets, visit VanGoghNYC.com.