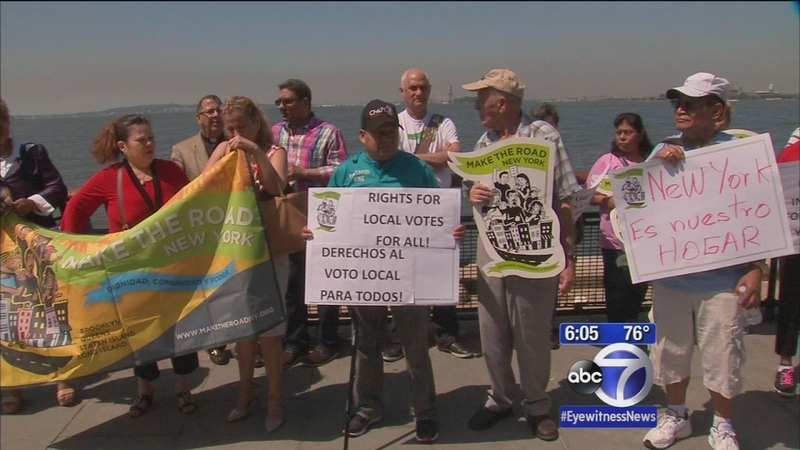 NEW YORK (WABC) --
It is a long shot, but a proposal by a New York State lawmaker would allow immigrants in the state illegally to become so-called "state citizens" if they've paid state taxes for at least three years.

It might sound a little strange for people to say 'I'm a citizen of New York State yet not an American citizen', but legal experts say it's doable.

And it's something many immigrants in New York desperately want, since the federal government hasn't budged on immigration reform.

"I could be deported tomorrow even though New York is my home. Brooklyn has been my home," said lawyer Cesar Vargas.

Vargas came to this country from Mexico when he was five. He's like almost 3 million other undocumented workers in New York State with few rights. He's a lawyer. He passed the bar but can't practice. He's not a citizen.

In Battery Park Monday, a rally was held with the Statue of Liberty as a backdrop.

"2.7 million people make their home in this state and we have a responsibility to them as a state," said State Senator Gustavo Rivera.

Rivera introduced a bill Monday that if someone has an ID, has lived in this country for three years and paid taxes, they could then become a citizen of New York State.

They would be allowed to vote and run in local and state elections. They could get a driver's license, and qualify for Medicaid coverage.

"Now all of these things will allow almost 3 million people to fully participate in the civic, political and economic life of the state of New York. They are already contributing," said Rivera.

The bill has almost no chance at becoming a law anytime soon in Albany. If it did, we would be American citizens and New York citizens as well, and conservatives call that absurd.

"It's a bad idea. It's not only bad, it's probably an insane idea to create a separate category of citizens in our country," said New York Conservative Party chairman Mike Long.

Conservatives say they're worred the idea is even being brought up in Albany, because that gets the discussion rolling, and eventually they fear something like this could pass.

Also, advocates agree, saying this bill won't pass anytime soon. But they want people to start thinking and talking about this issue.