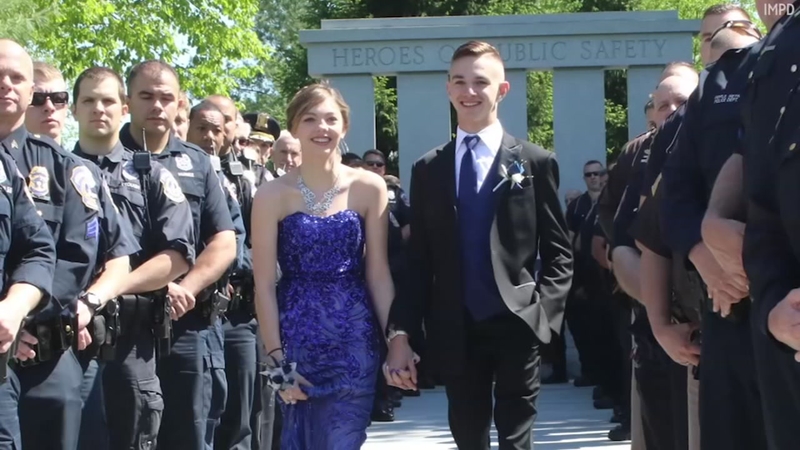 Sierra Bradway wanted to pay respects to her late father, Officer Rod Bradway, when taking her prom photos. What she didn't know was that several of Officer Broadway's colleagues would be there to share in her special moment.

Sierra's date for the prom was Brock Spayd, the son of Marion County Sheriff's Office Captain Spayd. Brock told his mom about Sierra's plan to visit her dad's gravesite, and Captain Spayd reached out to several police officers to surprise Sierra with a touching photo shoot.

"She called for officers to come and honor Rod and to show Sierra that her Blue Line Family will be here to support her, in all that she does," the Indianapolis Metropolitan Police Department said in a press release. "MCSO Deputies and IMPD Officers gladly answered the call and came out in force, to be a part of this surprise photo opportunity with Sierra."

The IMPD shared footage of the touching event on their Facebook page, with a clearly-stunned Sierra walking with her date Brock to her dad's gravesite, with dozens of police officers standing by. The video has been viewed over 162,000 times on Facebook, with many commenters praising the officers for their kind gestured.

"Very touching that was so inspiring and his daughter will hold that close forever in honor of her dear dad," wrote one Facebook user.