Instagram model recovering after shark bite in the Bahamas 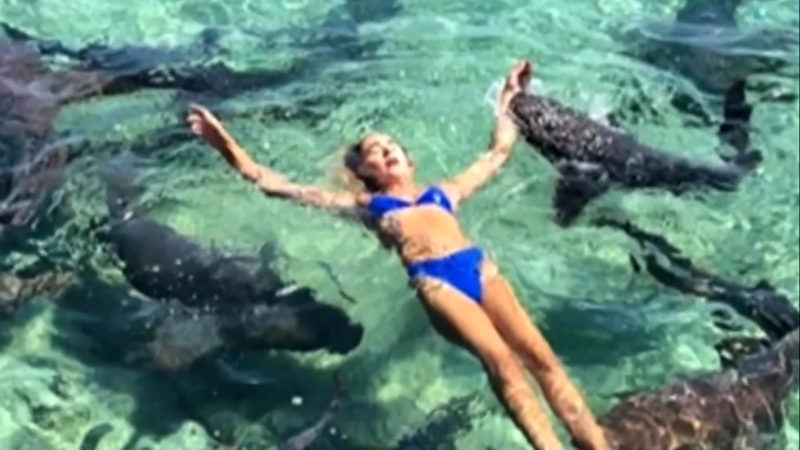 Instagram model recovering after shark bite in the Bahamas

MIAMI, Florida -- Katarina Zarutske, a 19-year-old Laguna Beach Instagram model, is recovering in Miami after being bitten by a shark.

It happened at the Staniel Cay Yacht Club in the Bahamas. The college student had seen others swimming with the nurse sharks in the ocean on social media and knew she wanted to experience it.

She began floating in the water and everything seemed fine, but then one of the animals bit her and dragged her underwater.

"I just felt this huge - it almost felt like 15 different people were holding onto my arm, really, really hard," Zarutske said.

She said the shark released quickly, so she was able to cover the bite on her left arm and get to shore. She went to the hospital to get treatment for her infected wounds.

"I have all my fingers, I have my wrists, and I'm just so blessed it was a minor accident," Zarutske said.

The owner of the marina, David Hocher, told Eyewitness News others have been bitten there, and there were warning signs posted. Zaruskie said she did not see them.

Hocher said the docile shark was likely drawn to the dangling fingers.

"Pretty sure that shark thought it was just another scrap from the fish bench that was floating enticingly in front of them," he said.

Zarutskie said she respects all wildlife and is grateful her injuries were not worse.

"What happened was an accident, and I don't want to throw the shark under the bus," Zarutske said. "He's a wild animal. I'm a human, and I was in his domain."