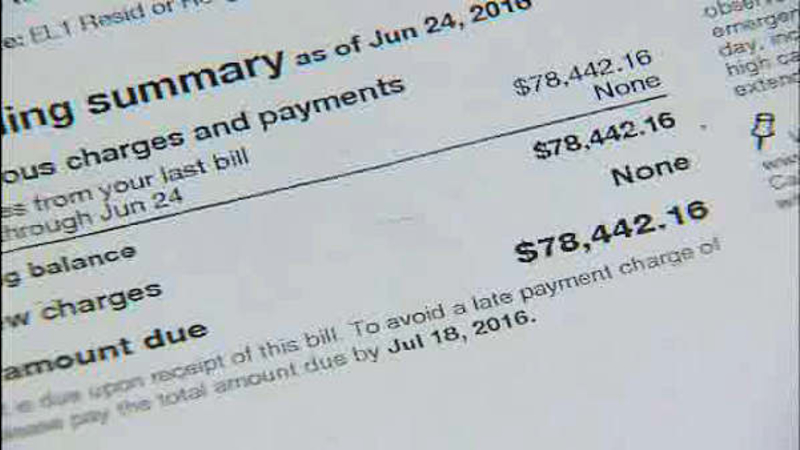 THE BRONX (WABC) -- Electric bills often go up in the summer, but when one Bronx woman kept getting bills for thousands of dollars for her tiny apartment, she knew something was wrong.

Sandra Berrios was unable to pay the mounting $78,000 bill, and Con Edison shut off her power despite her despite her complaints.

Now, she has been sitting in the dark for three months with no refrigerator, hot water or air conditioning, which has made her grandchild's asthma much worse in the high heat and humidity.

"I tried to call the commissioner, I called Con Edison," she said. "I called this, I called that. Nobody wanted to help."

Anyone looking her could see that she was being drastically over-charged for her gas and electric use. Initially, her bills ran between $120 to $130 per month for her three-bedroom apartment. But then, in June of 2015, her monthly bill jumped to more than $9,000.

It was $6,000 the following month, then $ 5,000 for months on end. She was being charged as though she was using electric and gas for a space 20 to 30 times as large as her apartment, and she wrote letters pleading with Con Ed to come investigate her meter as she fell tens of thousands of dollars behind.

A Con Ed official said Berrios had a history of not paying her utility bill, but that fails to explain why for nearly two years she kept getting bills on par with those received by major factory or large commercial building.

"This underscores that all the power is on one side," Bronx Assemblyman Jeffrey Dinowitz said. "And right now in New York state, there is no office to advocate specifically for utility consumers like the vast majority of states."

Dinowitz said Berrios' case illustrates the need for an independent utility consumer advocate, and he has crafted a bill that calls for one. It has been passed by the Assembly four times, but it never even gets to a vote in the Senate because of pro-business Republicans.

"Utility consumers come in all kinds of political parties," Dinowitz said. "It's not a partisan issue. This is about our constituents. We have to do the right thing by making this legislation law."

A few days after we reached out to Con Edison, a utility crew showed up at her apartment to install a new meter and to turn the electric and gas back on.

"Con Edison, I tried to get help from everybody," Berrios said. "It's like, I don't find no help from nobody. That's why I come to you."