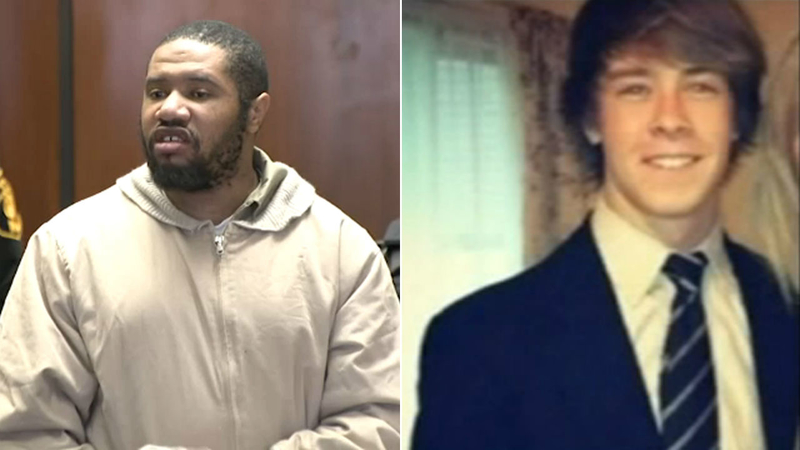 NEWARK, New Jersey (WABC) -- An admitted ISIS sympathizer who confessed to killing a teenager from West Orange was sentenced to life in prison without parole in New Jersey Tuesday.

Brown spoke to the court for six and a half minutes, apologizing to Tevlin's parents and loved ones and saying he wasn't going to look at them because he didn't want to disrespect them.

"I would like to say that I apologize to his parents and I apologize to those who were close to him and love him and respect him and honor him as an individual person," he said.

He asked to not be judged as a beast or a monster because he is human, and he called himself a saint and a person who understands himself to be god-like in his mind. He commended the judge as being intelligent and told him to "put me in prison for the rest of my life if that's what you choose. I know what I done." He also said he doesn't regret anything because "it made me who I am today."

"I would like to say to his parents that I apologize to them and if they'll please forgive me as a human being," he said. "I know that I made a mistake, that I killed someone. I know that I'm not supposed to kill people unjustly."

Judge Ronald Wigler called Brown monster who committed one of the most horrific crimes he has ever presided over.

"In your particular circumstance, there are absolutely zero mitigating factors on your behalf," he said. "I have been a judge for over eight years, and this is clearly one of the most, if not the most, heinous, horrific, brutal crimes that I have ever presided over."

A bright athletic and ambitious teen, Tevlin left an indelible mark on countless lives. And as one family member after another addressed the judge, the pain of his loss was palpable.

"It is the pain that comes with every birthday, holiday and anniversary," sister Michaela Tevlin said. "It is the immense fear I have when driving alone at night, holding my breath if a car ever pulls up along side me."

After more than half an hour of emotional testimony, Brown was sentenced to life without parole, marking the first homicide conviction under New Jersey's terrorism law.

"The person who committed this senseless act of violence is beneath our contempt, and his convoluted reasons for this heinous conduct are unworthy of our attention," mom Allison Tevlin said.

Brown also took responsibility for fatally shooting 23-year-old Dwone Anderson-Young and 27-year-old Ahmed Said earlier that month in Seattle after they left a gay nightclub, and for the deadly shooting of 30-year-old Leroy Henderson in the Seattle suburb of Skyway in April the same year. Brown said he killed the two in Seattle because he believed they were gay.

Brown pleaded guilty to multiple charges in March, including murder, robbery and terrorism. He has yet to make a plea in the Washington cases.

The killings "were part of an overarching plan to kill Americans" in retaliation for what Brown contended were "millions of lives" the U.S. had taken in the Middle East, Assistant Essex County Prosecutor Jamel Semper said.

In court papers filed in Seattle in 2014, authorities said Brown described himself to detectives after his New Jersey arrest as a strict Muslim who had become angry with the U.S. government's role in Iraq, Iran and Afghanistan. He claimed the government's actions led to the deaths of innocent civilians and children.

In a subsequent recorded interview in New Jersey, Washington authorities wrote, Brown described his idea of a "just kill," in which the target was men unaccompanied by women, children or elderly people.

According to prosecutors, Tevlin, a sophomore at Virginia's University of Richmond, was driving through West Orange on his way to his family's home in nearby Livingston when Brown and two other men, following him in another car, jumped out and surrounded him.

Brown shot Tevlin through the passenger-side window, hitting him 10 times, prosecutors said at the time of Brown's arrest. Tevlin's car was then driven to an apartment complex in West Orange with Tevlin inside, and some of his belongings were stolen.

Brown was found hiding in the woods in West Orange a few weeks after the shooting. After his arrest, prosecutors in New Jersey said results of ballistics tests from the Tevlin shooting were put into a national database and matched with the gun used in the Seattle killings.

Brown is serving a 35-year sentence for an armed robbery committed before the Tevlin murder.