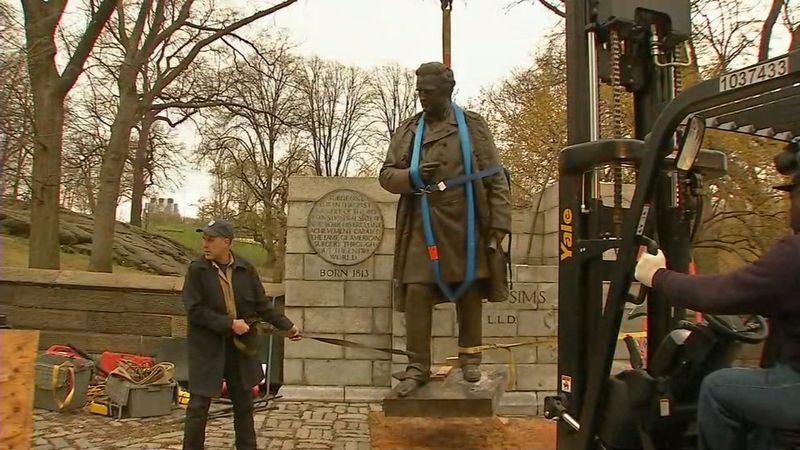 NEW YORK (WABC) -- A controversial statue was taken down in Central Park Tuesday.

A pedestal is all that remains where J. Marion Sims statue was standing at daybreak Tuesday. It was removed just after 8 a.m., and not a minute too soon for some.

Every day since Mercy Wellington moved to East Harlem, she's walked by the statue at 103rd Street. Each time, she was waiting for this day.

"Two years now," she said. "All of the horrific things he did to them in the name of medical research, and his statue is up there glorifying all of that."

She was joined by dozens of others who watched the statue so-called "Father of Gynecology" sawed from its foundation, lifted and taken away.

The workers left behind the pedestal where Sims was recognized for his work in childbirth.

What the placard didn't mention was the time between 1845 and 1849, when Sims conducted experiments on enslaved black women without anesthesia.

"He killed enslaved women, he experimented on them without their permission, you can't do that," area resident Rebecca Waysek said. "For him to have been here for as long as he was, it's time."

Sims' statue stood at the edge of Central Park for more than 80 years, though leaders in Harlem wanted the statue removed seven years ago.

"Each time I walk by as a black woman, I walk by knowing this, it's just disrespectful," Wellington said.

It was a panel review of all city statues in late 2017 that found Sims' statue was the only one citywide that was too controversial to stand.

The statue will be restored and relocated to Greenwood Cemetery in Brooklyn, where Dr. Sims is buried. For Wellington, she hopes the anger goes with him.

"I'm just happy it's coming down," Wellington said. "I really feel the ancestors can rest."

The pedestal will remain there with a temporary sign, while new work is commissioned to go in its place.

Other statues like the Christopher Columbus statue in Columbus Circle will have signs added to note context and the controversy surrounding the individual.