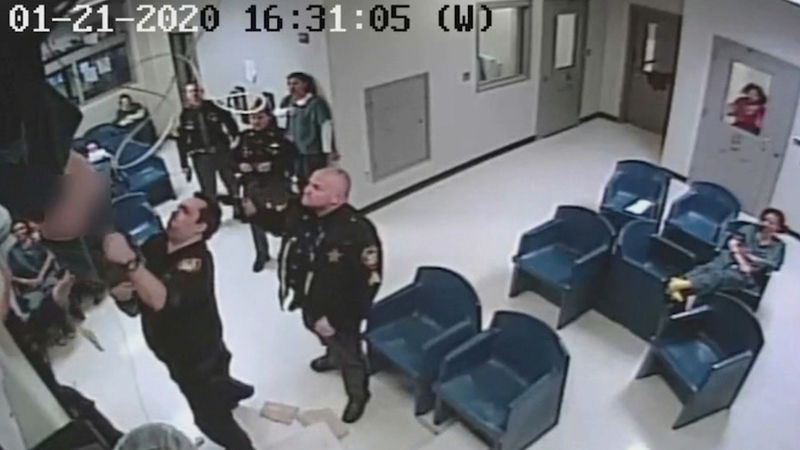 DAYTON, Ohio -- An epic fail was caught on camera!

An Ohio woman tried to escape from prison with cameras, inmates and officers watching.

Jessica Boomershine stood on the seat attached to a kiosk for several minutes, staring at the ceiling, then stepped down.

She would then drag a chair over, apparently for more stable footing.

In surveillance video, you can see that she waits for a while, with no one paying attention and then climbs up on top of the monitor.

She then takes a brief 30 second pause before she presumably moves a ceiling tile out of the way. Then, with other inmates now watching closely, Boomershine climbs up and out of sight.

The bid for freedom ends fast - 15 seconds later- as the first debris falls and corrections officers come into sight.

One officer walks past just seconds before the ceiling completely gives way and Boomershine drops back through.

More officers run over to grab her legs and she loses her grip, luckily landing partially on a trash can to avoid slamming her head on the tile floor.

The ill-fated escape leaves Boomershine dazed, CO's amazed, and ductwork and wires exposed and hanging from the ceiling.

Boomershine was arrested a few days before when Miamisburg police identified her and Billy Joe Farra as the people that befriended an 85-year-old man at a local casino.

Boomershine told the Miamisburg man she was broke and homeless, and he invited her to his house to give her food.

She came back the next day with Farra and they broke in, ransacked the place and assaulted the 85-year-old.

The victim was recovering back at home by the time Boomershine fell back through the ceiling during her attempted climb to freedom.

Now the 42-year-old is facing new charges for escape and destruction of property, on top of the targeting of the 85-year-old.

She did appear in court this week, this time in person with no efforts to escape.

The two extra charges Boomershine now faces is on top of the other charges she already faces.