Video of person-of-interest in stabbing of Queens woman 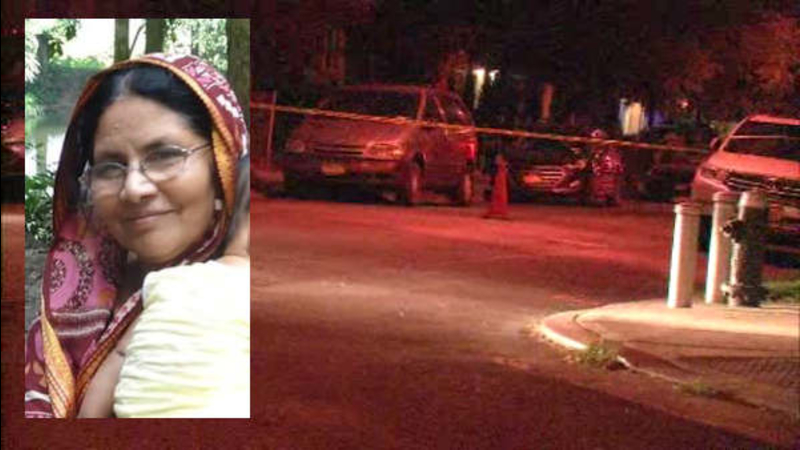 JAMAICA, Queens (WABC) -- A 60-year-old woman was stabbed to death in Queens Wednesday night, as she walked home from a grocery store with her husband. Thursday night, police released video of a person-of-interest in the case.

No other details about the person-of-interest were released.

N.J. Burkett has an update on the fatal stabbing of a woman in Queens.

Khanam was a retired school teacher and immigrant from Bangladesh, police say she suffered a stab wound to her torso. She was rushed to Jamaica Hospital, where she was pronounced dead.

Surveillance video shows her walking with a bag of groceries, and a second video shows a man running from the scene. Khanam's husband heard screams and ran to the scene, where he found her on the sidewalk. He was walking with her, but he reportedly has asthma and had to slow down and fell behind her. Authorities say he found her with the knife still in her chest, and her last words were "someone just killed me."

Hours after the love of his life died at his feet, 75-year-old Shamsul Alam Khan needed family members' support to get into a car for the ride to a funeral home, where he'd begin the devastating work of saying good bye.

Meanwhile, detectives from the NYPD Crime Stoppers Unit papered Jamaica Hills with flyers Thursday night, and police released video of a man they want to question.

Nothing was stolen so cops don't think it was a robbery. When it comes to motive, it's a mystery that's rocked this tight knit Bengali community.

"They're already devastated because of the number of incidents happened in recent months," said Sharneen Ahsan, Bangladesh Consul-General.

Ahsan, who visited with the family Thursday night, suggested the victim may have been targeted because of her Muslim faith.

The New York chapter of the Council on American-Islamic Relations (CAIR-NY) on Thursday called on police to investigate a possible bias motive in the stabbing.

According to a statement from the organization, Khanam was wearing Islamic attire at the time of the attack.
"Because of the recent killings of Muslims in Queens, and because of the growing number of anti-Muslim incidents nationwide resulting from the increasing Islamophobia in American society, we urge the NYPD to investigate a possible bias motive for this murder," CAIR-NY Executive Director Afaf Nasher said.

So far, police say they've found no evidence that this was bias related, but that hasn't stopped the fear, with the Muslim holiday of Eid fast approaching, neighborhood resident Nazia Johara may stay home.

"I think this year we may skip out on it, which is really sad, it's like not going to mass on Christmas," Johara said.

A knife was recovered nearby.

The victim's nephew is an NYPD transit officer who was off duty and responded to the scene. He has been on the force since 2008.